This morning, while it was still dark, I walked into my son's bedroom laden with medicines.
Ibuprofen for the pain. A huge pink antibiotic. A bottle of "magic mouthwash" for throat pain. A bottle of cough syrup laced with codeine and decongestant.
Spencer has been sick since Saturday. Sick sick.
He went with some friends to spend the weekend at Ohio University. OU is known across the nation for it's parties, but Spencer did not get to enjoy the parties. He got sick right away. He sat on a couch, half conscious until one of the OU boys took pity on him and walked him back to the dorm room. He slept on the futon in a sweaty fever and arrived back home the next morning.
We doused him with ibuprofen and Sudafed and sent him to bed. We thought it was a cold.
He got progressively worse through the day. We decided he might have the flu. His whole body hurt. When he was awake, he bemoaned that he couldn't live like this. He's not prone to drama, so I planned to take him to the doctor on Monday, but I didn't count on Martin Luther King Jr. Day. The doctor's office was closed. 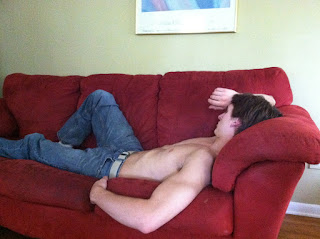 I knew that he could take Tamiflu to shorten the flu if I could get him in within 48 hours. The pharmacist encouraged me to call the emergency number at the doctor. "That's what they're there for," she said.
So I called and one of the doctors would be in the office for a couple of hours. I took Spence in.
He was so miserable. All he had done was sleep for two days. He sat in the office with his head in his hands, his skin a chalky color, his breathing through his mouth shallow.
The doctor was one we hadn't seen before. She commented on his swollen lymph nodes and checked his liver. She wouldn't give him Tamiflu without a flu test.
Have you had a flu test? It involves a cotton swab on the end of a 7-inch long stick. The swab goes up and up into the nostril. It ended with a nose bleed for Spencer.
"Just a virus," the doctor said. Then she gave us a blood test for mononucleosis the next day and sent us on our way.
Spence just moaned.
An hour later, the doctor's office called. Spence had a check up the Wednesday before and our regular doctor had checked him for strep, but the rapid test came back negative. After we left the office, the doctor checked the follow-up strep test. Yep, it was positive.
So he's been on antibiotics since Monday and he's starting to believe that he might make it through. Yesterday, he managed to sit up and play Xbox for a little while. He even managed to yell at the TV a few times.
I think he's on the road to recovery. He'd better be. It's back to college next week.
at January 23, 2013

Glad he is on the mend!

Strep is no fun - there will be plenty more parties for Spencer to actually enjoy! I bet he's glad he was home on break and Mom could take of him.