You know the old saying, when it rains, it pours.
I've had one of those days.
First, I wore myself out getting the basement ready for carpet yesterday.

According to my Fitbit, I walked the equivalent of more than 12 miles and 36 staircases. 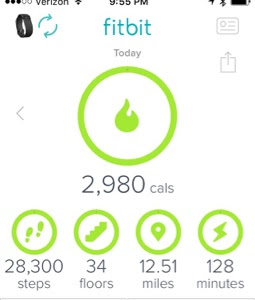 When I got home from work, I started by sweeping the entire basement with a broom.
Then I vacuumed it with a shop vac. That entailed either bending over from the waist or squatting. Both were excellent exercises if I weren't so exhausted.
After that, I swept it with a broom again to remove any remaining pebbles or dust. .
Next, I taped off the baseboard and painted the walls of the stairwell a pale blue gray.
And finally, I painted the walls of the basement, leaving them a  grayish-green, which feels fairly neutral.
My husband painted all the ceilings, in the stairwell and the basement, plus the baseboards.
He finished up this morning before heading to work.

We had taken the old rugs that were downstairs and thrown them in the garage. I wanted the carpet guys to take them away today. As I opened the garage door, they kind of collapsed out onto the driveway.
I pulled forward and back to avoid them and then headed on my way.
As I drove, I noticed a strange sound, like pebbles hitting the bottom of the car, the sound you hear when you drive over freshly paved asphalt.
A couple of people beeped, but it was rush hour.
My drive is only about four miles, but as I continued, I wondered if I might have driven over the padding that went under the rugs.

As I pulled into the parking lot, a young man pulled up beside me.
"You have something stuck under your car," he said.
He pointed at the front of the car and I saw that an entire room-sized rug was wedged under the front of the car. Not the padding as I had suspected. A fat tan rug.
"Do you smell that it is getting hot?" he asked, and I agreed that the rug was doing some sort of damage to the car.
He squatted down and tugged at the carpet. "Reverse," he suggested. So I did and he tugged it free.
"What should we do with it?" he asked. He assumed that I had run over it on the road, and I did not tell him the truth.
"I'll call Public Safety," I told him. And I did, telling them where in the parking lot to find it. Again, not admitting that it had come from my house.
Shaken from my experience, I taught for an hour and then my wrist started buzzing. I have a Fitbit that buzzes when I get a phone call.
I didn't recognize the number so didn't worry about it too much. Then a text came.
"Mom, it's Spencer. I was in an accident. I'm okay but I need our insurance information."
His phone was dead so he was using the phone of the woman he rear-ended.
His Volkswagen Passat hydroplaned as he tried to stop, and he hit the back of her car. He might have been fine physically, but he was pretty upset.
Car accidents are emotionally devastating. I tried to reassure him that it was just an accident and we had insurance. Everything would be okay.
I skipped my next class and drove through the rain to the accident scene where Spence sat in the car with the crumpled front end, the airbags hanging like deflated balloons. A police officer sat behind him with his lights flashing as cars whizzed past moving at 70 or 80 miles per hour. 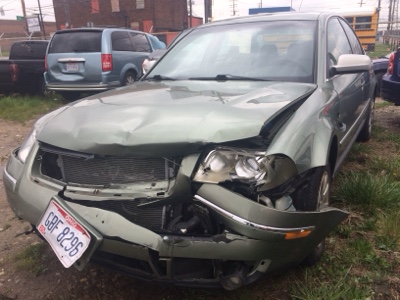 We were lucky he wasn't hurt. He banged his knee against the console and his ears rang for hours from the impact of the airbags.
The tow truck arrived shortly after I got there and I took Spence home. He didn't think he could face work today.
I went back to teach, but ended my last class early because I was too muddled to continue.
Now the carpet guys are here making a comfortable walking surface over that dust free floor downstairs.
I just have to wait for my husband to check my car to make sure I didn't permanently damage anything when I drove the carpet to work. Then he is headed up to the auto body shop to remove all of our belongings from Spencer's totaled car.
Tomorrow is enough time to begin the process of looking for a replacement car for Spencer.
What a day. :(
at April 11, 2017

You have my full sympathy!
Make sure your son gets checked out. Years ago, I was hit by a guy who ran a light and all I could think of was, I'm going to be in so much trouble if I'm late for work. I got to work, but within hours I was hurting bad. But since I had shown up, my boss told me I couldn't be injured and to keep working. Lovely guy. Anyway, the effects can take hours to come on.
I can't believe you did 28K steps! I went to IKEA today and just hit 10K. Incredible.
If you are interested, when you are around Carcassonne, I will introduce you to my Pilates instructor. I suspect you would love Pilates and her.

Oh my Paulita, what a day, indeed.

Wow you made me tired just reading it, so sorry your son had an accident but good he was ok, once you get to france you can slow down x

It certainly was "an accidental blog" today. So sorry all of you had this stress.

Francetaste, Thanks for your sympathy. I'm looking forward to meeting you in Carcassonne. I haven't tried Pilates before.
Just Me, Thanks for your support. Just exhausting, not tragic, so I'll try to count my blessings.
Roz, Yes, I hope that happens and life can be a bit calmer.
Sillygirl, Good point! Accidents do happen. Thanks for the good wishes

After a car accident, you may be confused about whether or not you have a claim for compensation so always hire a good lawyer to get some help.