Even as I titled this blog, I wondered if there was anything structured about the chaos of our house these past few weeks.
As you know, I took on extra classes, so I'm teaching eight college classes. That leaves me scrambling to grade and get out of the house before 7:30 every morning.
And it's right about this time that we decided to begin  renovating the house with plans to sell it this summer.
We started with the downstairs bathroom. A former student of mine had told me that he did renovations, having worked for the basement doctor. He tore out the shower stall. You can see where the previous owner had colorfully painted the entire basement. 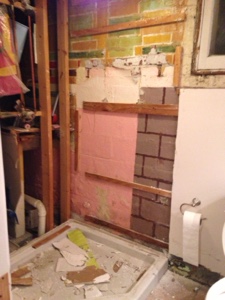 He also took out the old window. Now that I look at this old window, I can't help but think how charming it is to fit our 1920s house. 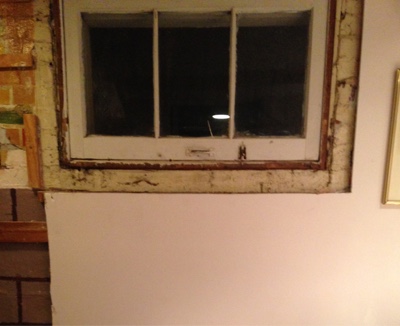 We kept the counter and sink the same, but framed in the mirror so it looked more finished. 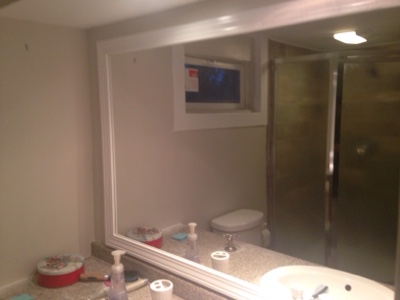 Here's the tiled shower. I think it turned out pretty well. 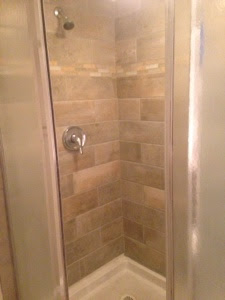 We started to put a laminate floor in the bedroom, but since the concrete is uneven, the floor felt strange to walk on. So we pulled up the faux wood. The carpet is arriving on Tuesday. 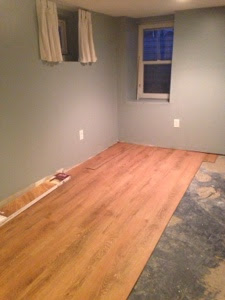 That led us to another issue. We had to clean everything out of the basement and move all the furniture. That's two desks, a dresser, a futon, a file cabinet, a bookshelf, a television stand plus the TV, Playstation, and cable box.
Now the furniture doesn't sound that hard to move, but I can't begin to explain all of the things that were on all this furniture. Notebooks and DVDs and CDs, sheet music that we haven't played since we moved here, plus guitar picks and so many paperback and hardback books.
I spent Saturday morning cleaning the debris off all of the furniture. Then my youngest son arrived home in the early afternoon. He helped me move all of the furniture into the laundry room and furnace room, which are now stacked high.
Luckily, he's a strapping 21 year old, and if I moved too slowly to hoist a piece of furniture into the air, he would just pick it up and move it.
There was only one piece of furniture that was too heavy for us to move easily, and it was the television stand that I hoped to get rid of. I planned to get it up the stairs and put it along the curb, where someone always seems to be happy to pick up whatever we set out.
Since we couldn't move it, we slid it into the laundry room instead, where it is really in the way.
Tucker hurried off. He had a game of Frisbee golf to get too, followed by a tee time for real golf. That boy has so many hobbies.
I spent the rest of the afternoon rolling up the rug and cleaning the floor. But the basement floor has an issue, a mound in the middle, which was obvious, even under the rug. We needed to bust out the mound and smooth it out.
Luckily, the guy who was working on the basement was back finishing up the bathroom. When he told me how much he would charge to break up the concrete, carry it out and fill the hole with new concrete, we took him up on it. 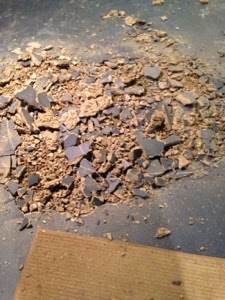 He took a sledgehammer to the floor before he left.
Then he returned on Sunday and carried buckets full of concrete and gravel out of the house.Once he was finished, he mixed up eight bags of concrete, pouring it into the hole and smoothing it out with the edge of a 2x4. 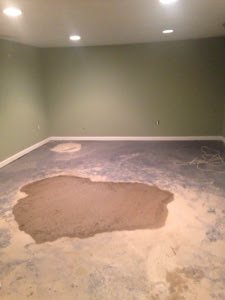 By this evening, the concrete should be hardened enough for me to sweep up the dust and pebbles. Then the floor should be ready for carpet. But we would like to paint the stairway and the main rooms before the carpet arrives, so it might be a few days of non-stop painting before the carpet is put down.
See, things are chaotic, but they're about to be finished for a bit, until we start the renovations on the upstairs bathroom anyway.
at April 10, 2017

You are a brave woman.
Your story sound scarily familiar. My husband and I physically added on the second story of our house (no help from a builder), with 3 young children in tow, both of us working full time (I was teaching) and long hours, on top of which I was also writing 4 text books. Crazy stuff and fuel for burnout if you're not careful. Take care and good luck with your demanding project. Elizabeth

Elizabeth, Thanks for visiting. I can't imagine such a big job with three little kids. At least mine are grown now and occasionally helpful.

Good luck! Renovations are terrible while you're living through them. And the results might be so good you won't want to sell! Good thing you'll get to relax a little when school ends soon.

Francetaste,
Yes, I'm relaxing now as the carpet guys work in the basement. We got the entire stairwell and basement walls painted, along with the ceiling and the baseboards yesterday. Exhausting.

Jackie, You're right. I'm sure we'll love all the renovations.

I think this is a really good article. You make this information interesting and engaging. You give readers a lot to think about and I appreciate that kind of writing.
https://www.lcrenovation.co.uk/renovations-in-vauxhall/
House Renovations in Vauxhall