I Didn't Imagine It Would Be So Difficult -- Jury Duty

So I showed up at a court on Monday morning, and by lunch time, I'd been seated on a jury and the trial had begun. It soon became apparent that the trial was not a matter of life and death. It dealt with drugs. But within a few minutes of opening arguments, I got a sneaking suspicion that the government was trying the wrong guy. The man on trial was 29, worked two jobs, and had a baby just a few months old. He had been arrested for having cocaine at his house. How did the government know? A drug dealer for 13 years who had been arrested for having more than 1 kilo of cocaine, weed, thousands of dollars in money, and assault weapons, include a grenade launcher, had turned informant for the government.
That informant, who made my skin crawl, went to the defendant's house where his cousin, a drug dealer for five years, had come with a kilo of cocaine. He split the kilo into two and gave half of it to the informant. A tape from the informant included the defendant's voice to prove that he was there. Three drug dealers had made deals with the government and testified against the defendant. This was the defendant's first time taking part in a drug deal. 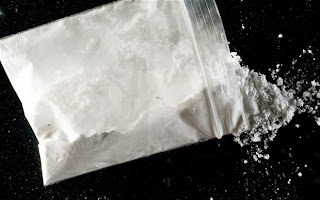 When his wife got on the stand across from the jury, her feet didn't touch the ground. I immediately felt empathy for her, because that happens to me too. As a matter of fact, sitting in the jury box, my feet didn't reach the floor.
The government did such a shoddy job on this case. In addition to relying on drug dealers as their main witnesses, they didn't find any cocaine paraphernalia in the defendant's house. The informant said there was a blender covered with coke. He said there was a scale. The cousin drug dealer said they used latex gloves to handle the cocaine. The search warrant turned up no scale, no blender, no gloves, no baggies even.
I held onto the idea that the cousin brought the cocaine to the defendant's house. The cousin was staying up in the loft of the house. And I believed that the cousin could have brought the cocaine without the defendant's knowledge. I held onto the belief that the defendant was not guilty.
I wouldn't go by the testimony of the three drug dealers who were still not on trial or in jail and who were making deals with the government. One of the drug dealers is now working for Rite Rug. Can you imagine having him in to clean your carpets? Another drug dealer is a subcontractor doing dry wall. Again, can you imagine wanting to have him in your house?
These guys were dealing with $38,000 worth of cocaine every week or so then selling it to distributors who sold it in smaller bags. The defendant, the government said, allowed his cousin to use his house to store the cocaine. This was the first time.
When we went to the jury room, I was the lone hold out. I needed the physical evidence. Then we requested the audio tape that the informant made when he went to buy the cocaine. (Although he didn't actually buy it because they just gave it to him and he would pay them for it later after he sold it.)
In the courtroom, the audio tape was just crackly and blaring. In the jury room, we could hear the voices more clearly. And we heard the defendant, and his voice was right next to the other men as the cocaine transaction happened. He had to have been there, to have been part of it.
I imagined his poor wife, her feet not reaching the floor in that big witness chair.
In the courtroom, I didn't look at either of them, but I couldn't avoid her wails as the verdict was read. She would be raising her child alone.
I had to remind myself that the defendant was the one who put his wife in this position. He shouldn't have allowed the cocaine in his house.
He now faces a 5-year mandatory sentence. He's an immigrant, so he'll probably be deported after he does his prison sentence.
And the drug dealers who testified against him? They're still free. They might be in to clean your rugs.
at April 24, 2015

it's true what they say, you do the crime you do the time. i feel bad for his family, he maybe thought he would make some extra cash. it's sad.

Lucia, Yeah, and that's what I have to keep telling myself. I was awake for a couple of hours last night worrying about it, not that it does me any good. I'm just mad about the worse offenders being out and about.

Thank you for telling your story. The state of our system today leaves me with greater and greater feelings of injustice, I say, without excusing the behavior of the defendants. For example, I don't believe you should run from the police, but I also do not believe that gives the police the right to use excessive force. Any who. Better stop there.

Just Me,
Exactly. During the trial, the prosecutor was saying to the defendant, "so we're supposed to believe you just stood in the Kroger parking lot handcuffed without demanding to know what you were arrested for." And I thought, obviously, you've never been a minority being arrested by the police. Of course, you just stand there so you can avoid excessive force.

so typical where the heavies strike a deal with the government.