On a crisp Autumn afternoon, my youngest went to have his senior pictures taken. He went under protest. He didn't understand why senior pictures had to be a big deal. He just needed one picture.
And, he needed some clean khaki shorts to wear, he warned as he headed back to school after lunch. Luckily, my husband had a load of laundry in the dryer, including a pair of khaki shorts.
I'd taken Tucker to the store a few weeks before and encouraged him to buy a new shirt for senior pictures.
"I'll just wear a shirt I have," he said and refused to pick out anything new.
So after school, with our 4 o'clock  appointment creeping closer, I asked what he planned to wear.
A blue polo shirt, he said. A polo shirt is as close as Tucker gets to considering himself dressed up. And a blue polo shirt is fine, but it isn't what he would normally wear. And I like a senior picture in clothes that the kids would usually wear.
"Maybe we'll just take along another shirt to change in to," I suggested.
"What? I'm not changing shirts. Where would I change?"
"You are a guy. You can take your shirt off and put on another one," I explained to my son who is a swimmer and spends half his life in a tiny Speedo swimsuit.
Then he put on his blue polo and I pointed out it was wrinkled.
"I'll iron it," I said.
"It doesn't need to be ironed. We need to go."
I held out my hand for the blue shirt and took along a red shirt that has some dark striations through it. I thought it might look good in contrast to his dark hair and beard.
And, yes, apparently the beard would stay for the picture.
Sullen, would be the way I'd describe him, as we scrambled to get out the door to meet the photographer.
But as soon as she met us, he became quite pleasant. 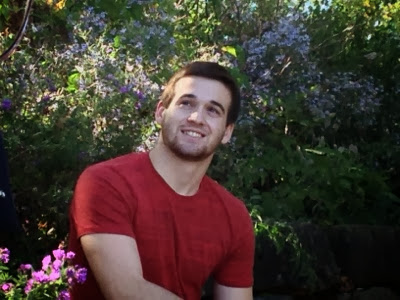 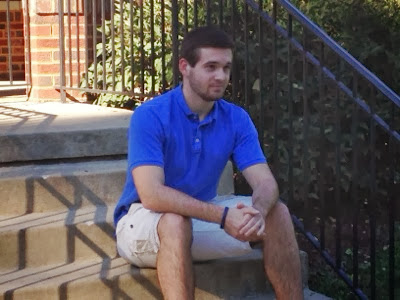 In both the red shirt and the blue shirt. 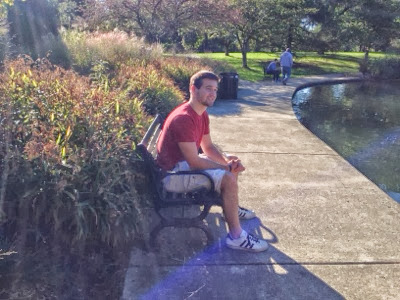 In various places around the park. 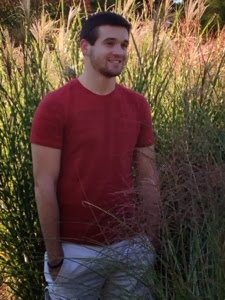 She thought the reddish grasses would go well with his red shirt. He warned me before we went that he was only doing close-lipped smiles. I told him we spent thousands of dollars on his teeth so he should be willing to show them.
I tried to convince him that he should have different smiles and we'd pick the one that looked best.
Spencer regrets that he "looks a little mean" in his pictures because he didn't smile, I told Tucker.
"He is mean," Tucker said, still getting over his role of little brother apparently
And when he got there, Tucker did smile. I guess he just likes to argue about it with me. 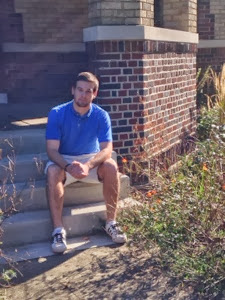 The photographer showed us a couple of shots that she got and I think we'll have plenty to choose from. Yes, they're all better than my phone shots in the background. 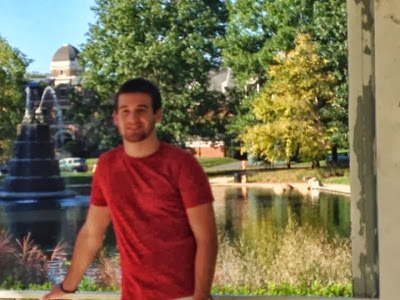 I noticed in the middle of the photography shoot that Tucker was wearing a bracelet. I don't know if it was a conscious decision to leave it on or if he just forgot it. I thought maybe he'd wear the watch he bought in Paris last year, but apparently that $100 expenditure has fallen out of popularity.
The bracelet is one of those rubber ones, the kind Lance Armstrong made popular. This one is in support of a high school teacher and basketball coach who was just diagnosed with colon cancer before school started. So maybe it's okay that the bracelet is in his senior picture.
at October 09, 2013

Your photos are great. What happened to the senior photos in front of a backdrop?

Jackie, The photographer we use only does outdoor with natural light, in the evening or in the morning.

I like the last photo the best. Not crazy about the grass one. He doesn't look like a stalker but it has a stalkerish feel to it.
Great smile overall! :)

My how senior photos have changed, so casual now --love them. My fav is the first one or any of the ones in the red shirt:)

I am not sure what Senior photos are ,, the ones in the Red shirt are the best.

My sons would be the same ,why do you need a photo.. actually I would too .. I actually hate having my photo taken ,,, I think I will get one professional one done and give them all a copy. :-)

That is one handsome young man! Nice settings too.

Times have changed as they didn't used to do "Senior photos." Then again both my kids did their senior years through home school programs. That was about 9-10 years ago.

How wonderful you son supports his teachers with the bracelet. I have a nephew who had brain cancer at the age of 22, his whole family wears the yellow Live Strong bracelets to this day. In fact, when he married 5 years ago, there was a basket full of them for the guests. It is important to Jake that we all support him. Good job, Tucker!!!!

Oh forgot to mention , lots of youngsters where these bracelets here too , great way to celebrate someone's life and keep memories going , and great way to raise money for a charity they want to support.