Words of Wisdom From a Marriage

As a kid, I used to read the column "Can This Marriage Be Saved?" in a women's magazine, maybe Ladies Home Journal. The columnist would outline both sides and then dispense words of wisdom.
Sometimes, I feel like I might be that wise columnist, but I only hear the one side from my best friend in Michigan, and I've learned to laugh at the totally ludicrous words that come from her self-obsessed husband.
He's had some real jewels the past few weeks. When they were discussing her "output control" issues, he said, "I've learned to tolerate you over the years."
With that kind of obvious adoration for her, it's hard to imagine why this marriage is floundering. 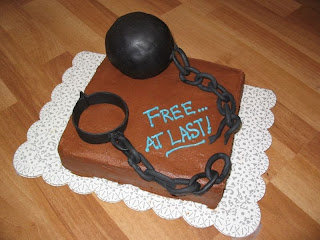 When one day they were discussing if they would ever remarry other people if one of them died, the husband said, "Oh, my God. I could not do this again."
In the midst of another argument, he declared, "I'm sure there's somebody out there who would love me more than you do."
I'm not sure why she didn't take him up on it and suggest he go look for that somebody.
Then just this week, her two teenage sons got in a fistfight and had to be pulled apart. My friend was obviously distraught at the idea that her children were willing to beat on each other. She told her husband that she needed some support from him.
"Oh, I gave you support earlier in the week when I let you go to Washington for two days," he said.
She had to go away for work to Washington and he was kind enough to "allow" her to go. He has no problem overspending the money she makes, about twice as much as he does.
In the past, for her birthday he has given her a horse (which she never got) and a trip to Paris (which she had to pay for). He schedules twice monthly massages for himself to relieve all of his stress. She's been sick since October and can't seem to get well because of all the stress she's actually under.
So, back to the original question: "Can This Marriage Be Saved?"
My diagnosis: As long as she's willing to laugh off his narcissism and verbal attacks, the marriage can continue indefinitely. I'm willing to to be her sounding board for as long as she needs me because I love her even if she's married to an asshat.
And, just in case she decides someday to meet him at the courthouse, I'll try to keep track of all the hurtful things he says. She may need them as evidence.
Photo from www.media.cakecentral.com
at December 03, 2010

Such an apt post for me this week ... sounds really bad for your friend .. He doesn't seem to have any respect for your friend and his comments to her would make any one stressed if they were continuous!!

Thank you for your lovely comment, oh yes I don't know how France seem to capture such life in the villages..

When I see it in print like thatyou reallyseem to capture the true scope of things. Actually sounds hilarious. This is a cautionary tale ladies. There is a reason a large majority of divorced women say they would NEVER marry again - they have met my husband. You are still the best thing in my life.

You have a way of telling a story that makes me bust out laughing.

Hopefully not at your expense
Mrs.BFF.

I wish my/our arguments were as funny.

Doesn't sound like a good marriage to me either. I wouldn't put up with it but I do know that ending a marriage really takes a lot of courage and work.

BFF - I could never read this post and think it hilarious, and I am currently "walking in your shoes" so I do understand where you are coming from. When I first saw the picture of the cake, I felt so hopeful because I thought maybe you were finaly able to walk away. I hope you know that YOU ARE NOT the person he is making you out to be in the awful things he says and does to you. He is just trying to control you because he is so out of control himself.

Leaving him will free you in ways that you cannot currently imagine. Until (and if) you are finally able to make that decision, focus on YOU and making YOUR life the best that it can be. YOU are responsible for your own happiness, as is he.

There are those of us out here that you don't even know who are pulling for you.

I just came to your post and reading above thing it is very impressive me and it is very nice blog. Thanks a lot for sharing this.
Private swim lessons