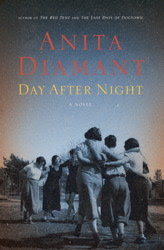 Finally, I finished a great book and I wanted to share it with you instead of complaining about my children and my students.
This book Day After Night by Anita Diamant is set in Palestine just after World War II. I guess I'd never thought about how Jewish people came together to form Israel. I kind of pictured governments clearing out the Palestinians and handing the keys over to the Jewish people.
Diamant focuses on a "camp," a "prison" where illegal immigrants (Jews from around Europe) were taken when they arrived in Israel. These people, many of whom had been held in concentration camps, were kept inside barbed wire fences with British guards watching over them. Yes, it gave them flashbacks to the concentration camps.
Diamant creates some great characters to show us the different experiences of Jewish women who were brought together in Israel.
Leonie, who was French, hid a guilty secret that she passed for a non-Jew and worked as a prostitute. Is that a statement about the French surrendering, I wonder?
Zorah, from Poland, had been in a concentration camp. She was so angry she vowed never to forget. She couldn't feel grateful that she had survived, but she couldn't give up on her life because others had sacrificed for her to survive.
Tedi was from Amsterdam and her parents sent her to a farm because she could pass for non-Jew. She was raped repeatedly by the son, and when she finally complained to the mother, the Nazis arrived the next day to take her. She came to the concentration camp able to smell people's emotions. She said most everyone smelled of shame and guilty.
Shayndel was a Polish freedom fighter who saw her friends die.
The cook at the camp had a different perspective, kind of disrepecting the Jews who had "allowed" themselves to be imprisoned and murdered, as if she would have fought harder had it been her.
It sounds grim, and there are many heartbreaking stories, but in the end the hope of continuing life wins over the despair of the Holocaust.
at October 12, 2009

The smell of guilt and shame. Powerful sense. I love that passage.

Me too. I haven't even seen Schindler's list, but I loved the Red Tent, also by Diamant, so I picked up this one and enjoyed it.

I loved this book. I have such a hard time reading about the holocaust and this was a book about redemption from the holocaust. It was beautiful

Ok, but this will need to be the last title on my desk this year. I'm afraid of a avalanche.

This sounds like my kind of read, the strong emotional and messy message stuff; cause I'm always looking for clues on how to do this thing called life.