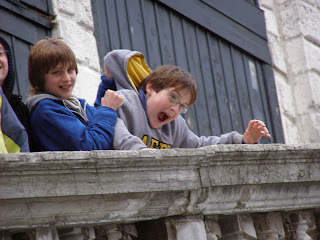 It's hard to believe that this guy attempting to throw his little brother off Venice's Rialto Bridge is the same tall, silent teenager who strides through our house today.
He is 16 now, and he has brought a lot of joy to my life. He's the kind of kid who thinks deep. When he was in preschool (he went for half a year) he and a buddy tried to drink all of the water in the water fountain. It was one of those white porcelain drinking fountains attached to the wall. They, of course, didn't understand that it was connected to pipes in the wall that would continuously supply water.
He was always the kind of kid who had to stick his hand against the waffle iron, rattle the dog chain, climb a wall that had rocks protruding. He never took our word for anything and he was rarely still.
If he'd gone to school, I'm sure they would have diagnosed him as hyperactive. When he was a baby, he would flip, flip, flip then fall asleep. He could not lie still until he was actually asleep. Now he gets rid of that energy by playing basketball.
As a teenager, he has reined himself in. He's careful about what he says now, always thinking about the kind of impression it might leave. Sometimes he let's his guard down and returns to his old self.
We were going through Wendy's drive through the other day when he said, "Have you ever done fire in the hole?"
"What?" we all asked.
"You know, you go through the drive through, order a drink and then when the window is open, you throw the drink back in and yell 'fire in the hole!' "
We were all laughing by the time he finished. He admitted he had never done it, and I, the mature parent, encouraged him not to do it. 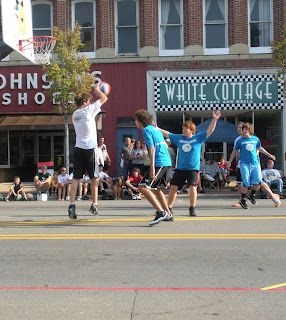 Maybe his deep thinking these days isn't about philosophy or what happens to people when they die or even about his next chess move (which he's taken up again this year). Maybe his brain is full of statistics for fantasy football and basketball plays and remembering which upper classmen will give him a ride to Chipotle for lunch. Someday though, he may come out of his teenage musings and become the kid again who touches and knocks into things just to see what they do.
Maybe someday, as he towers over his classmates at 6-foot, three inches, he'll figure he already stands out so he may as well not try to fit in.
at October 28, 2009

Email ThisBlogThis!Share to TwitterShare to FacebookShare to Pinterest
Labels: growing up, sons, teenagers

I look at these pictures and wonder both where those little boys we loved so fiercely went and what happened to us. Thank god you are still the same. My Life Would Suck Without You.