As I read The Vanished Collection by Pauline Baer de Perignon, I couldn't help comparing the differences between a book written for a French audience versus a book written for an American audience. In France, the subtleties count. In the U.S., we want the mystery laid out and the answer hinted at throughout so we can feel that sense of accomplishment at the end. 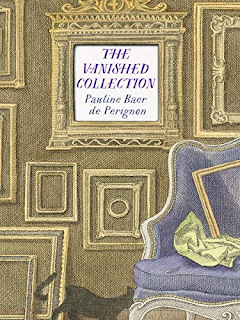 At the beginning, the conflict was unclear. The author's cousin had hinted that perhaps her great grandfather's painting had been confiscated by the Nazis. Confiscated seems too tame a word. Stolen, taken, ripped from his grasp. But the family thought he had sold his collection. They thought her great grandfather and grandmother voluntarily moved from their Paris apartment. They didn't even think about the Jewish roots of their family and the dangers the ancestors faced living in occupied Paris. Slowly, the author reveals the research she did and how she discovered her great grandfather's life during World War II.

Having researched the topic of stolen art during World War II for my novel The Summer of France,

I was already enthralled by the idea of looking back at undiscovered thefts by the Nazis and the effort it takes to try to redeem the crimes committed in the 1940s. This book was set within the past five years. I enjoyed The Vanished Collection and the peek into the French mind, where no one wanted to discuss the atrocities of the Nazis during the war, preferring not to remember that neighbor turned against neighbor. But the author needed to knock on each door and dredge up each memory to search for the truth of her great grandfather's life.

You can find this book on Amazon in kindle or paperback

How have things gone with you since September when you last posted?

Looks like you are having problems with your blog - so sorry.

Sillygirl, Sorry I haven't been blogging. I've started posts several times then just not followed through. Not sure what I'm going to do. Perhaps I'll get reinvigorated and blog again. Sometimes I'm tempted to do brief VLOGS and post them here, like my morning trip to the bakery or a torturous trip to the post office. Things are in flux.
Thanks for always supporting me.

Thanks for your great review.
I was a bit confused though by your first paragraph. How does this apply to this book, originally written in French and published in France? Did you feel there were many subtleties in this book? In what way?
Emma at France Book Tours