The wedding is quickly upon us, only five more days. 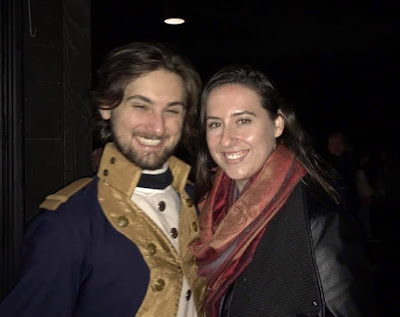 I had planned to spend the day with Grace on Sunday. She was bringing her wedding dress over to try on again (it felt safer to keep the dress here instead of in her apartment where the cats might spread their fur or sharpen their claws). We are staying at our friend's Deb and Greg's house.
When Grace arrived in the afternoon, she had spoken with the DJ to finalize the songs and the order of events.
"I'm feeling very anxious," she said as she carried the big white garment bag stretched over her head.
"Is it the wedding? The DJ? The dress?" I queried.
"No, World War III." (In case I look back at this years from now and don't remember, the U.S. assassinated Suliemani, the second in command in Iran and tensions are high waiting for retaliation).
I know the current events are stressful, but I think her anxiety is deflecting away from the wedding. We talked and when she had calmed down, she tried on the dress. We showed it to my friend Deb who knew all the right things to say so that Grace felt bridal and confident in how she looked in the beautiful gown.
Next, I tried on my two dresses. Deb helped me find a purple dress back in September, but it's kind of form fitting and not the kind of dress I would usually wear.
I had found another dress that looked good, but wasn't as dressy.
I tried on both the red dress and the purple dress.
The purple dress was voted the favorite, so that's what I'll wear for the wedding.
Grace and Earl practiced their father/daughter dance and I whisked her off to have coffee and some sustenance, not telling her that we had organized a little bridal tea.
It started last week when her future mother-in-law and sister-in-law lamented that she hadn't had a bridal shower.
That was her wish. They're getting rid of all their things to move to France. It seemed silly to buy them new things.
A tea fete-ing Grace seemed like a good idea. The seed had been planted but didn't begin to germinate until Sunday morning when I called La Chatelaine to see if they could accommodate 10-15 people around 3:30. Yes, they could.
I texted people. Other people text people. As you can see from the picture below, we had a good turnout for a 7-hour turn around.
Grace was surprised and slightly annoyed at us, but truly overwhelmed at the love from everyone.


Flower girls Regan and Caroline attended their first bridal shower and they were both appalled that their mother had purchased a black lacy bra for Grace. Regan hid under the table while Caroline, after futilely trying to convince her mother she couldn't possibly give that as a present, stood by Grace suggesting she shouldn't remove it from the bag. It was funny and so sweet and innocent.
We had many French goodies to eat and played a few games.
Although it was impromptu, it was so easy -- no one had to clean their house ahead of time, no one had to fix food, no one had to clean up. I highly recommend a last-minute bridal tea if you're as disorganized as I am.
Just a few more days and the wedding will be here.

It's been a while since I stopped by but, congrats to your daughter and how great that they will be in Paris as well.

What a wonderful idea! Best wishes for the wedding. Remember to relax and enjoy yourself, it will go by so quickly!

They are moving to France?? Wow, when??

Diane, Thanks for stopping by. I need to get back to visit all of my favorite blogs. I've been reading a lot lately so I should get some book ideas.
Mary, Thanks. I'm trying to enjoy the moment.
Anne, Yes, in March they are coming to stay with us for awhile then Grace is going to grad school in Scotland.

Hi Paulita. Wow how wonderful. Where in Scotland? I am only two hours away from the border?? Answer when the wedding is over xx