FranceBookTours -- The Secret of the Abbey 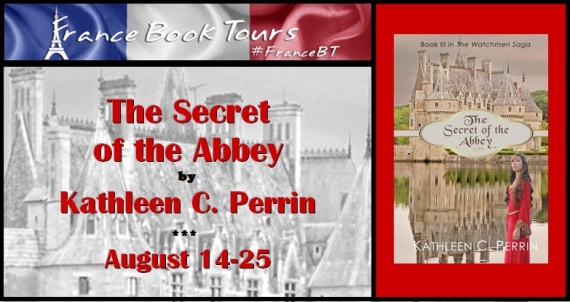 CLICK ON THE BANNER TO READ REVIEWS, GUEST-POST AND EXCERPT


The Secret of the Abbey by Kathleen C. Perrin is a blend of historical fiction and fantasy that really immerses the reader in France, specifically in Mont St. Michel, that historic icon in northwestern France.
This is book 3 in The Watchmen Saga, and I hadn't read the previous two books, but plenty of details were included to help me catch up in this latest novel.
Although the book is told from various viewpoints, the main character is Katelyn, an 18-year-old American, who has been chosen by the Archangel Michael to be one of the Watchmen to protect an ancient secret hidden in Mont St. Michel. 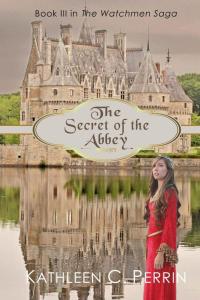 And since Katelyn is chosen by the Archangel, things suddenly go her way. A writing project for school is made into a novel with a $25,000 advance. A French stranger dies and leaves her an exclusive inn on Mont St. Michel. Ahh, what a lovely fantasy. I can definitely get swept up in that.
But Katelyn's main conflict isn't in the present day, but with her fellow Watchman Nicolas. The two of them jump centuries, Nicolas from the 1400s and Katelyn from today to help save Mont St. Michel from the Catholic/Huguenot battles in the 16th century.
Sometimes the history is a bit dense, but overall I really enjoyed the suspense and the immersion into historical life. If I had the chance, I would definitely fit my key into the stone in Mont St. Michel and be transported back into time, just to see how it changes through the ages. The author did a wonderful job of capturing details so the reader can experience France throughout the centuries. It made me want to take another trip to Mont St. Michel -- and maybe I will in 2018.
Scroll down and enter to win a copy of this novel. If you can't visit Mont St. Michel this fall, or even next year, this book can take you there throughout the centuries that it has existed.


The Secret of the Abbey

After unwillingly leaving a comatose Nicolas behind on Mont Saint Michel in 1429, Katelyn Michaels is distraught to be back in the United States in modern times. When a series of remarkable events facilitates her taking up residence on the Mount and reveals why Katelyn was called as a Watchman, her fondest hope is to be reunited with Nicolas, regardless of the circumstances. However, when Nicolas unexpectedly arrives with a new mission for her, Katelyn is devastated to learn that his head injury has deprived him of any memories of their relationship. Nonetheless, she is determined to once again save the Mount—this time in sixteenth-century France amidst violent religious turmoil—and rekindle Nicolas’s feelings for her. The couple’s love and loyalty is tested as she and Nicolas attempt to unmask the true source of the threat¬—their adversary Abdon—sort out their conflicting emotions, and deal with the consequences of an astounding age-old secret.

Kathleen C. Perrin holds bachelor’s degrees in French and Humanities from Brigham Young University and is a certified French translator. Besides being the author of The Watchmen Saga, she has published several non-fiction articles, academic papers, and a religious history about Tahiti. Kathleen has lived in Utah, New York City, France, and French Polynesia. She and her French husband have spent years investigating the mysteries and beauties of his native country —where they have a cottage—and have taken tourist groups to France. The Perrins have three children and currently reside in Utah.

Visit each blogger on the tour: tweeting about the giveaway everyday of the Tour will give you 5 extra entries each time! [just follow the directions on the entry-form]
Global giveaway open to all 8 winners

thanks for your lovely review. so glad you enjoyed it. I think you would love the first 2 books as well. and it's wonderful it's given you the desire to go and visit again. I would love too to go and see things there that the author mentions.

So glad you enjoyed the read, and I hope you get a chance to get back to Mont Saint Michel. Don't miss seeing Notre-Dame-Sous-Terre!
Kathleen

Wonderful review. I can't wait to read it. Actually I want to read all three books. Thank you for the post.
Carol L
Lucky4750 (at) aol (dot) com

Emma, You're welcome.
Kathleen, Thanks for letting me read your novel.
Carol, I hope you clicked on the "Enter" to win a copy of the book.

I would love too to go and see things there that the author mentions.