Creating families can be a funny, coincidental thing -- unless it's not.
I met my husband in Florida. We both worked for The Tampa Tribune. I lived in Clearwater and he lived in St. Petersburg. He was in a dying marriage and I was a fresh, straight-out-of-grad school 24-year-old.
On the outside, it would seem like the two of us did not have a lot in common, but once we got to know each other, we discovered that we both came from Ohio, a state about 1200 miles north of Florida.
And we both were born into families with four children, and they fell in parallel genders, girl, boy, girl, boy for both of us. So that's a coincidence.
Next we learned that both of us had lost our oldest sisters. His sister died at 36 when she was hit by a drunk driver. My oldest sister died at age 18 in the Beverly Hills Supper Club fire.
That left both of our families with two boys and one girl.

Now, about 29 years after we met, we find ourselves with a family made up of one daughter and two sons, having recreated the families we came from. 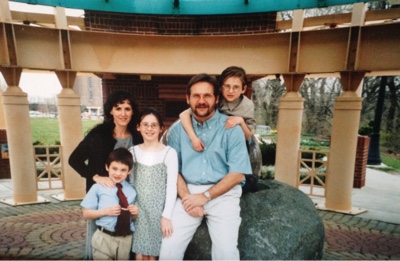 When the kids were little, I did wish that Grace could have a sister. Maybe I wanted to mirror the family that I grew up in.
I don't often think about the coincidence of my family and Earl's family, except when I get names all muddled in my head.
If I'm feeling protective toward one of the boys I might call them Kevin, the name of my younger brother. And the other day, thinking about Grace, I instead called her Tammy in my head.
I listened to an NPR story called "When the Brain Scrambles Names, It's Because You Love Them" about how certain names, names for family, friends, co-workers, all get put into different compartments and that's why people (mothers and fathers especially) call their children by the other kids' names or even their pets' names, because they are all in the family compartment.
But I do wonder, did Earl and I intentionally create a family like the ones we grew up in -- or was it just luck that the dominoes fell to create our right-sized family.
What do you think? Coincidence or do we intentionally create or avoid the families we had?
at March 25, 2017

That's a kind of heavy thought! Can we intentionally have a girl or boy child? I don't think so, but then how would I know? I do know that my husband and I came from families that are larger than our own. I from a family of 4 siblings, he from a family of 5, and we have 2 children. We don't have coincidence of family structure in our immediate families. We don't nor do our our siblings have as many children or in the same girl, girl, boy, boy structure. So, food for thought.

Paulita this is such a lovely story, it looks like you two were meant to be together, I am a firm believer in fate in fact John is from a scottish famiy whose coat of arms says que serra serra ( what will be will be)

Judy, Good point that we had no control over whether we would have a boy or a girl.
Roz, Yes, perhaps fate is a stronger word than coincidence. When Grace and her boyfriend visited Scotland, they found his family castle. Across the entrance of the castle, it said: "As long as there is a Macrae inside, there will never be a Fraser outside." It just so happens that our relatives are the Frasers, so apparently there is an ancient bond between his clan and our clan.