A few weeks ago, I noticed that Trader Joe's had dried lavender for sale. I quickly snatched it up and brought it home, imagining the fragrant scent wafting through the dining room.
The bunch was too small for most of our wide vases, so I decided to use a glass decanter that usually sets atop the China cabinet.
I have several decanters that originally belonged to my grandmother, who lived in a strict teetotaler household. I'm not sure why she was drawn to the heavy glass decanters, but rather than alcohol, she used to fill them with colored water and set them on the windowsill where the sun would sparkle on the jewel-colored liquid.
I had enough lavender for two decanters, so I stuck some lavender stems in each and set one in the dining room and the other in the bathroom in front of the mirror. 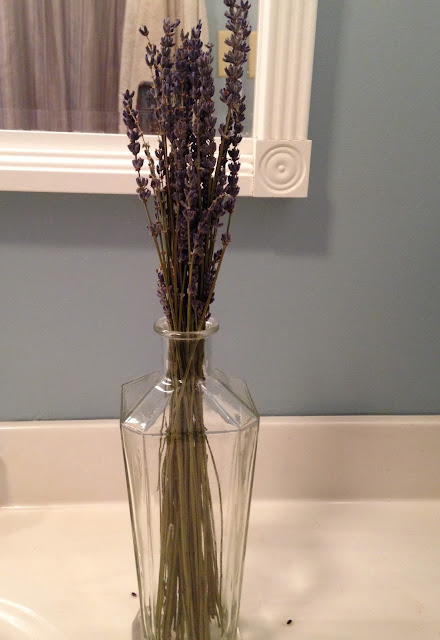 As much as I love the look and the fragrance of the lavender in the bathroom, as the little pieces of lavender get brushed or give up their grips on the stems, they tumble to the countertop. And once on the counter, they look like mouse droppings. 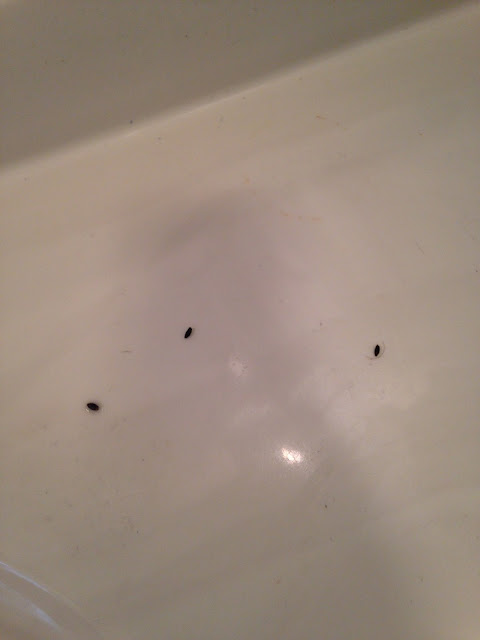 I quickly wipe them up, but every time I see them, they give me a bit of a start.
Perhaps this is why I haven't kept dried lavender in the house before.
Hope whatever problems that you are having are as inconsequential as mine.
Happy New Year!

Ha ! Too funny. Thanks for the belly laugh. My first world problem is I have a cold (that's not the problem). When I have a cold I can not stay heat, so I have to make these sporadic mad dashes outside for fresh cool air, even with the house at 65F. Happy New Year !

Just Me, Now that is a problem I can relate to. Hope you feel better soon.

Thanks for the smile today. I just wish we had a Trader Joe's nearby. I think the closest one may be in Denver, 6 hrs from my house!!! Actually I just did a check, closest is Fort Collins CO, only 5 hrs away. I am going to keep a look out for lavender bouquets in our Walmart or local grocery!! Again, thanks for the smile today! Happy New Year!