FranceBookTours -- The Sisters of Versailles

Click on the picture above to go to the blog tour info.

Today I'm reviewing The Sisters of Versailles by Sally Christie for FranceBookTours.
Everyone knows about the Palace of Versailles and its sumptuousness, so setting a novel there insured that the reader would be steeped in French history. Some might expect a novel set in Versailles would focus on the Sun King, Louis IV, but this one centers on the time of Louis XV in the 18th century, and it's based on a true story about four of five sisters who became mistresses of the king.
The five sisters take turns telling their stories.
At the beginning, I worried as each sister told a similar story, but as the pages turned, their language became more individualized and in-depth.
They quickly moved from their childhood nursery to marriage and to Versailles where more adventures began.
Here's where the shenanigans with the king begin as told by Louise, the oldest of the sisters:


The music stops, and suddenly the meaning of this meeting becomes clear. "You wish my help in finding the king a mistress?" I say, looking between the two charmers.
Fleury looks at Charolais, who makes a small grimace, as if to say, I told you so. She turns back to me with a dazzling smile. "You are very perceptive, dear Louise. As always. It is true in a way that we wish you help, and who better to help us than the one we wish would help us the most?"
I am not sure I understand. At Versailles in such situations, it is always best to remain silent.
Fleury steps in: "I think we need to talk plainly, and simply. Clearly, Louise, we think you should be the king's mistress. For the king, and for France."


Louise is an innocent and falls in love with the king, but some of her sisters have other motives as they weasel their way into the bed of the king.
The novel definitely kept me reading and I'd recommend it to anyone who enjoys France or historical novels.
Make sure you scroll down to the bottom of the post to get a chance to win a copy of the novel.

SYNOPSIS
A sumptuous and sensual tale of power, romance, family, and betrayal centered around four sisters and one King. Carefully researched and ornately detailed, The Sisters of Versailles is the first book in an exciting new historical fiction trilogy about King Louis XV, France’s most “well-beloved” monarch, and the women who shared his heart and his bed.
Set against the lavish backdrop of the French Court in the early years of the 18th century, The Sisters of Versailles is the extraordinary tale of the five Nesle sisters—Louise, Pauline, Diane, Hortense, and Marie-Anne—four of whom became mistresses to King Louis XV. Their scandalous story is stranger than fiction but true in every shocking, amusing, and heartbreaking detail. 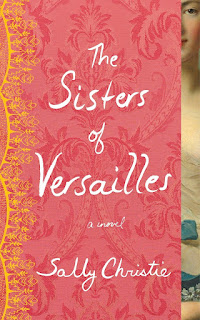 Court intriguers are beginning to sense that young King Louis XV, after seven years of marriage, is tiring of his Polish wife. The race is on to find a mistress for the royal bed as various factions put their best feet—and women—forward. The King’s scheming ministers push Louise, the eldest of the aristocratic Nesle sisters, into the arms of the King. Over the following decade, she and her sisters—ambitious Pauline; complacent Diane, and cunning Marie Anne—will conspire, betray, suffer, and triumph in a desperate fight for both love and power.
The Sisters of Versailles is a treat through and through – the characters are witty and engaging and come together to create an undeniable page-turner. Sally Christie has a wonderful sense of pace and the book unfolds in front of you like a delicious gift. Even as the scandals pile up and the intrigue mounts, you can’t help but fall in love with these sisters and their competing infatuations with the King.
In the tradition of The Other Boleyn Girl, The Sisters of Versailles is a clever, intelligent, and absorbing novel that historical fiction fans will devour. Based on meticulous research on a group of women never before written about in English, Sally Christie’s stunning debut is a complex exploration of power and sisterhood—of the admiration, competition, and even hatred that can coexist within a family when the stakes are high enough.

Sally Christie was born in England of British parents
and grew up around the world,
attending eight schools in three languages.
She spent most of her career working in international development
and is currently settled in Toronto.
A life-long history buff who wishes time travel were a real possibility
—she’d be off to the eighteenth century in a flash!
The Sisters of Versailles is her first novel.


Learn more about the sisters and the mistresses in the Versailles trilogy on her websiteBecome a fan to hear about her next novels!
Check her Pinterest page
Follow Simon & Schuster on Twitter and Facebook
Buy the book | on Amazon  |  Barnes & Noble   | Books-a-Million  | IndieBound
You can enter to win a copy of the novel at the entry form below.

thanks for your nice review. The sisters are definitely so different! Emma at FBT

I can't wait to read this one and I love that it's a trilogy. I've not read anything about the Nesle sisters. The last book I read set in the court of Versailles was Juliet Grey's Marie Antoinette trilogy.

This sounds like a must read for me. Talk about sibling rivalry! I have read Sandra Gulland's books and loved them.I enjoyed seeing her in person at our local library, when she did a reading for "The Shadow Queen".