Every Tuesday, Diane at Bibliophile by the Sea posts the first paragraph of her current read. Anyone can join in. Go to Diane's website for the image and share the first paragraph of the current book you are reading.
My bookshelf is appalling bare, but I have so little time to read this month that it isn't likely to change, although I'm getting that itch to go to the library and carry an armload of books home. 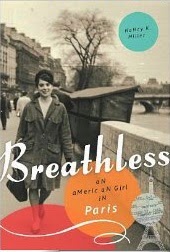 I did still have this on my shelf and decided to at least start it. It's a memoir set in the 1960s, Breathless An American Girl in Paris by Nancy K. Miller. I feel like I've been that girl, just in a different era.
Here's the intro:


I didn't set out to sleep with Philippe. For one thing, he was my parents' friend; for another, he was married.

On one of their many trips to Paris before I lived there, my parents met Philippe Rousel, an ophthalmologist, at Aux Charpentiers, a neighborhood restaurant near Saint-Germain des Pres, where long, family-style tables bring you into closer contact with other diners than you might wish. In his travel diary, which I discovered after his death, my father reported that the French friends who had recommended the resyaurant had said that "while not modern or elegant it was a place where intellectuals came to eat."

I hope the book is closer to that first paragraph than the second.

I am intrigued by books set in Paris...and I'm a fan of the 60s, having been young during those times...LOL.

Here's mine: “INTO THE DARKEST CORNER”

I really like the first paragraph. She's fallen for her parents' friend, and the guy is also married. This makes for interesting dynamics. Does she feel guilty? This guy must have a lot going for him. What? I didn't like the second paragraph either. I lost interest. Hope the book will pick up again.

A trip to Paris is on my to-do list, so I'm sure I'd enjoy this story, especially since it takes place in the 1960s. The opening sentences definitely make me want to know all about what happens.
Thanks so much for stopping by my blog and taking the time to leave a comment.
Sandy @ TEXAS TWANG.

Yes, this is an amazing book!

I'm also someone who like books set in Paris. I'd keep reading!

I like the cover, but wasn't grabbed by the intro sadly:( Hope it's great though.

sounds sweet, enjoy. Have a nice week. kelley—the road goes ever ever on

I am not a huge fan of books involving cheating, but it is a catchy first sentence. Very well done.