And the Winner is...

This summer and fall, we've been traipsing around the Eastern United States trying to help Grace figure out which college she should go to. She has been resistent, insisting that she could just stay home, attend Ohio State or Columbus State, cuddle with her cats, keep her nice settled life.
But we've pushed and some swim coaches have pulled. She started out this summer at the University of Maryland for a national swim meet. She stopped in West Virginia and we made a day trip to a small liberal arts college in Ohio. Then we drove five hours to Indiana before she and Earl zoomed to the Adirondacks.
Mostly, I remember the pools and the schools' non-aggressive team names:
She started with the Cardinals and snuck in a pre-season swim: 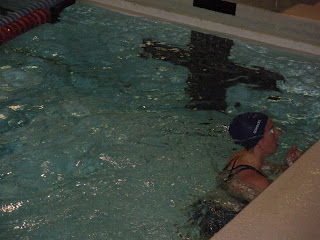 We spent an afternoon with the Quakers, my alma mater: 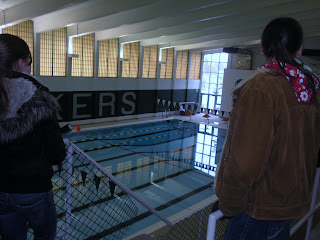 We met the Aces at 5:45 a.m. and they gathered at the end of the practice to sing that Taylor Swift song: "Marry me Juliet we'll never have to be alone..." 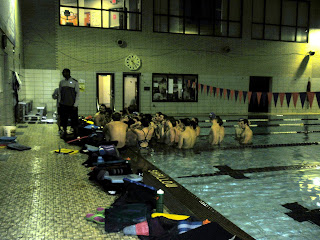 Then came the Saints: 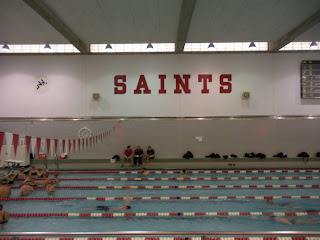 This weekend, on her long drive home, she called, and said: "You just know when it's right. This is it."
So she has chosen the most expensive college we looked at and one of the hardest to get into. Only 34% of applicants were accepted last year. Hopefully, the eager swim coach will be able to use his pull to get Grace into the college.
She chose the farthest away. A 10-hour drive. We looked at flights. With layovers and driving time, we could get there in 7 1/2 hours flying.
The real selling point though, is she's excited about going. They have a great biology program, they have tons of languages, and the swim coach says she can participate in theater.
Fingers crossed now. Thank you notes in the mail. Interview out of the way and applicant essays nearly finished, we'll wait to see if she gets her first choice. If not, some of her fallback positions aren't bad either and they're a little closer.
at November 10, 2009

Good luck Grace. YOu go girl! If I could get into Hillsdale, surely Grace can get in anywhere she wants to go