Why I Can't Afford Not to Buy a Mac

You know those commercials for PCs? The ones that show ordinary people who need computers. They say what their requirements are and then they go into Best Buy and shop for a computer. The Mac always looks tempting, but it's out of their price range, so they buy a PC and walk out happy. They are especially happy when someone hands them a wad of cash, reimbursing them for their PC purchase.
When we started out with computers, about 1994, we bought a Mac. Then about five years later, we bought another -- an iMac that was blue.

It was big and took up a lot of the desk, but I was so glad that it didn't have one of those crazy PC towers. Sometime in the 2000s, my boys started lobbying for a PC so they could play games. Well, games were not a high priority for me, but I did want a laptop so I could take my computer out of the house and away from children. 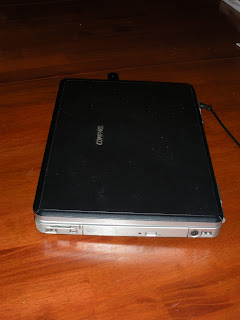 I bought my first laptop about 5 years ago. It was a black Compaq and cost around $1500. It did what I needed it to for a few years then it died, taking many of my digital photos with it. I had a new hard drive put in for a few hundred dollars but it didn't run well, so I bought a small compact silver Compaq Presario. It lasted a year and half or two years and then the motor started making a strange noise. 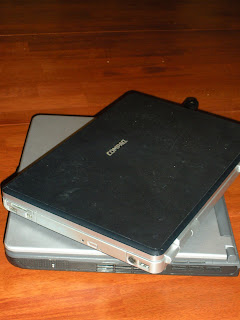 I kept backing it up and sure enough, one day, it wouldn't start. Again, I had a new hard drive put in and it works like a glorified word processor. Not to worry though, I'd taken the plunge at Circuit City as it was going out of business. I bought a Toshiba PC in late November, spending only about $900 on it, plus the $199 for Microsoft Office. 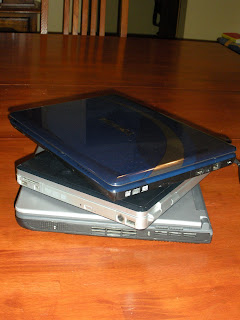 And now, only six months later, I am unable to turn on my shiny blue Toshiba. I'm only in a mild panic, since summer quarter started today and all of my prompts and lesson plans are on that computer. Not to mention, Quicken, which keeps track of how much money we have in our accounts, all of our digital photos, my previous novel Trail Mix and my current novel The Summer of France, and a list of agents I've sent query letters to. I'm in a bit of denial that it has given up the ghost. Everytime I turn it on, I expect that this time it will boot up. No... maybe this time... No.
So, I'm contemplating whether to contact Toshiba. I know Circit City has gone under, much like the computer. Then it hit me. The company I really need to contact is Apple. I'll tell them my story, how I ended up spending $5000 on three laptops in five years. How I could have spent that money on a reliable Mac that would have lasted five years. And if I'd wanted to upgrade, I could have sold the used Mac for some good money. I could point out that if I'd bought a Mac, I'd have all of my children's photos and I would currently sound like a more persuasive teacher than the woman who hems and haws, trying to remember what was on that lesson plan.
Then, maybe Apple will send me to Apple store to pick out a sleek laptop and when I walk out case in hand, they'll reimburse me the money, just like on the PC commercials where those suckers are buying a PC, not realizing they'll be back at the store within two years to buy another, then another, then another.
at June 29, 2009

Man you have has some bad luck with laptops. After researching computers for Daniel I'm convinced that the only computer I will buy (besides a mac) is an Acer. We've been very happy with our Acer computers. Our first Acer laptop lasted about 7 years, and while it still runs it is too slow to use. So for my little mini laptop that I plan to buy I'll be getting the Acer. But I completely agree with your ideas about imacs, I think they are the way to go if you have the $.

You're only in a "mild" panic?! You're a better woman than I.

Ok, is it "normal" to go through computers like this? I'm just saying...

I have another friend who replaces vaccuum cleaners semi-annually, which is much less painful economically, I suppose.

Good luck on that with Apple. My husband has a mac and loves it-me, not so much. I have an HP right now which is ok but not the best. I wasn't too happy with my Dell either. I'm starting to think they have to be replaced every few years. I am always backing up my photos. You just never know.

I have an HP for work that is the crappiest piece of junk ever sold as a computer and I had a Dell for work with my last job that wasn't much better. In the last year I have had 3 new work computers 2 within 2 weeks and in each case it tok and average of 10 days to get it working correctly with help from IT and the manufacturer. We need a new desktop and for the past 6 or 7 months I haved been squirreling away money in my underwear drawer for an apple. The kids have now offered to pony up the final $300 so we can get it sooner. We will not make the same mistake twice (I did buy my husband an HP for Christmas so he can check e-mail etc at work but since he brings it to bed it is my sincerest wish it will explode). For my money, and Apple is the only way to go. Of course, I will keep buying hubby cheap laptops since all he does is e-mail and disturb my sleep.

I am waiting for my Mom to finally consent to the Apple desk top. With 6 people using the computer it is now so slow that you can take a shower waiting for a web page to load. WE have a Gateway now and can barely stand to use the thing. My brother calls i8t T Rex and we cannot load anymore iTunes songs on it.

Hilarious. Take a shower while waiting for the webpage to load. Especially the length of showers teenager take!