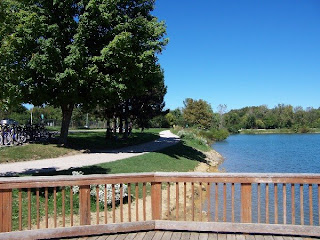 Well, the mileage on today's run is a little shaky, but according to the Gmaps Pedometer (which refuses to recognize the bike trail so counts the road mileage)that is how far we went before I felt that jab on top of my foot.
"Go on without me," I called to my running friends. "I've got something in my shoe."
I bent over, swiping my finger under my sock. It felt like a thorn had worked its way under. Nothing. I ran a few more steps. There it was again. A jab.
I sat down on the bike trail, untied my shoes and peeled off the sock. I turned the sock inside out. Nothing. I put it back on and noticed a red spot on top of my foot. Maybe my shoes were too tight. I loosened the tie over the part of my foot next to the ankle and ran a few steps again. Weird!
It seriously felt like something was jabbing me and was that just a little twinge going down that tendon toward my toe. We were almost at the turn around, so my running friends were rounding the corner and coming back toward me. I had just managed to get warmed up in my shorts and short-sleeved shirt in the brisk morning air. Walking was making me cool and that pain in my foot persisted.
I explained my dilemma, Pam took my shoe and relaced it, advising me not to wear it so tight. "Let's walk some," she suggested.
After only a few steps, I felt a twang. That's the word my running partner Stephanie had used. A twang. Something definitely feels wrong.
Now the old me would have toughed it out and run back to the lake, twang or no twang. But the new me wants to avoid injuries, especially now that those size 10s are fitting comfortably.
"I don't think I should go," I said.
Funny, because as I walked up to my friends, they had been in the process of saying that at this point, at the halfway mark, you get back to the beginning even if you have to crawl. Here I was saying, nope. Not gonna make it.
"Did you bring your cell phone?" I asked Najah. I thought I could call Earl who was dropping Grace at the SAT at 7:45. Nope, no phone.
Noreen suggested I wait while they run back and then someone would come pick me up. Then Najah turned to me with her big eyes wide. "You need someone to wait with you, don't you?"
I know she was only pretending she didn't want to run so I wouldn't be alone, which I appreciate, but I hate that she ruined her own run.
As we walked toward the parking lot, searching for some sun to wait, a couple ran by and said the time was 7:38. We sat and talked, chill bumps covering our legs.
Najah pulled her long sleeved shirt over her legs. We talked about scars and kids and teachers.
We walked toward the road, wondering what time it was and how long it would take them to run back to the car before Noreen came to retrieve us. We watched people walk in and out of the coffee shop and regretted that we didn't run with money.
We watched people drive up and park so they could go on walks and runs. We thought about asking if we could borrow a blanket or even just a dog to snuggle with. No one even spoke to us as we waited.
When Noreen arrived (YEA!) we climbed in the car and that twang was still there.
I don't regret the run, though on this gorgeous day with the clearest sky ever and the mist rising off the lake. I only regret that I didn't make it back to the lake.
at June 06, 2009