Summer is finally arriving in the south of France, with a gorgeous day today. The sky was so blue; the white clouds, fluffy. So Earl and I rode our bikes to the Esperaza market. It's about 10 kilometers (6 miles) each way. Usually, we saunter around the market, admiring the rotisserie chickens as they drop fat onto the potatoes below, the handmade instruments we're always tempted to buy for the nieces and nephews, or the clumps of rose-colored garlic.

Today, we simply parked our bikes and parked ourselves at a café, our usual café. The one where the waitress recognizes us and we can chat about whether she accepted a contract for the summer and what other restaurant she might be working in. "It's a young woman's game," she says, but in French, and that's my interpretation of it.

While Earl ordered coffee, I waited in the ever-growing line at the bakery. I only go to that bakery on Sundays, but they have the best pain au raisin in the area. When I stepped inside, I saw one pain au raisin remaining. Not to worry, Earl prefers a palmier, so if no one took the pain au raisin, I was golden. The man behind me, his red hair knotted into frizzy dreadlocks that reached his elbows, shook the coins in his hand. I felt sure that he was ogling that pain au raisin when he stepped up to the vienoisserie case. When the woman in front of me asked for bread, I felt relief. I hurried to order the pain au raisin and palmier before anyone else could snag them.

Then back to the café where Earl waited with our coffee. I even made a joke in French to my friend Claudine. She texted me a picture of a croissant and coffee and said the emoji for a pain au raisin doesn't exist. I told her pain au raisins don't exist any more in Esperaza, cause I just ate the last one. I was pretty proud of that, although she is probably too polite to tell me if I said it correctly in French.

"We need tomatoes," I pointed out as we continued to occupy our table after the pastries were long finished. "We could find someplace to lock up the bikes or you could sit here with the bikes and I'll go get the tomatoes." He agreed to the second option and I walked past the cheese and wine carts, ignoring the scent of the olives black and green from another cart, and I didn't look twice at the jewelry stalls. Straight to the fruits and vegetables where I chose tomatoes that look dark greenish red.

We rode home as the morning waned and felt slightly proud of adding exercise to our morning market routine.

On Saturday, we enjoyed dinner at Sue and Steve's in Couiza and it included a walk for Sue and me, plus Elwing, their dog. As we climbed up the road past Montazel, the vista opened up. Sue pointed out Rennes le Chateau across the way, and the craggly top of Bugarach beyond it. I sent a picture to Grace since her master's thesis is focusing on Rennes le Chateau. 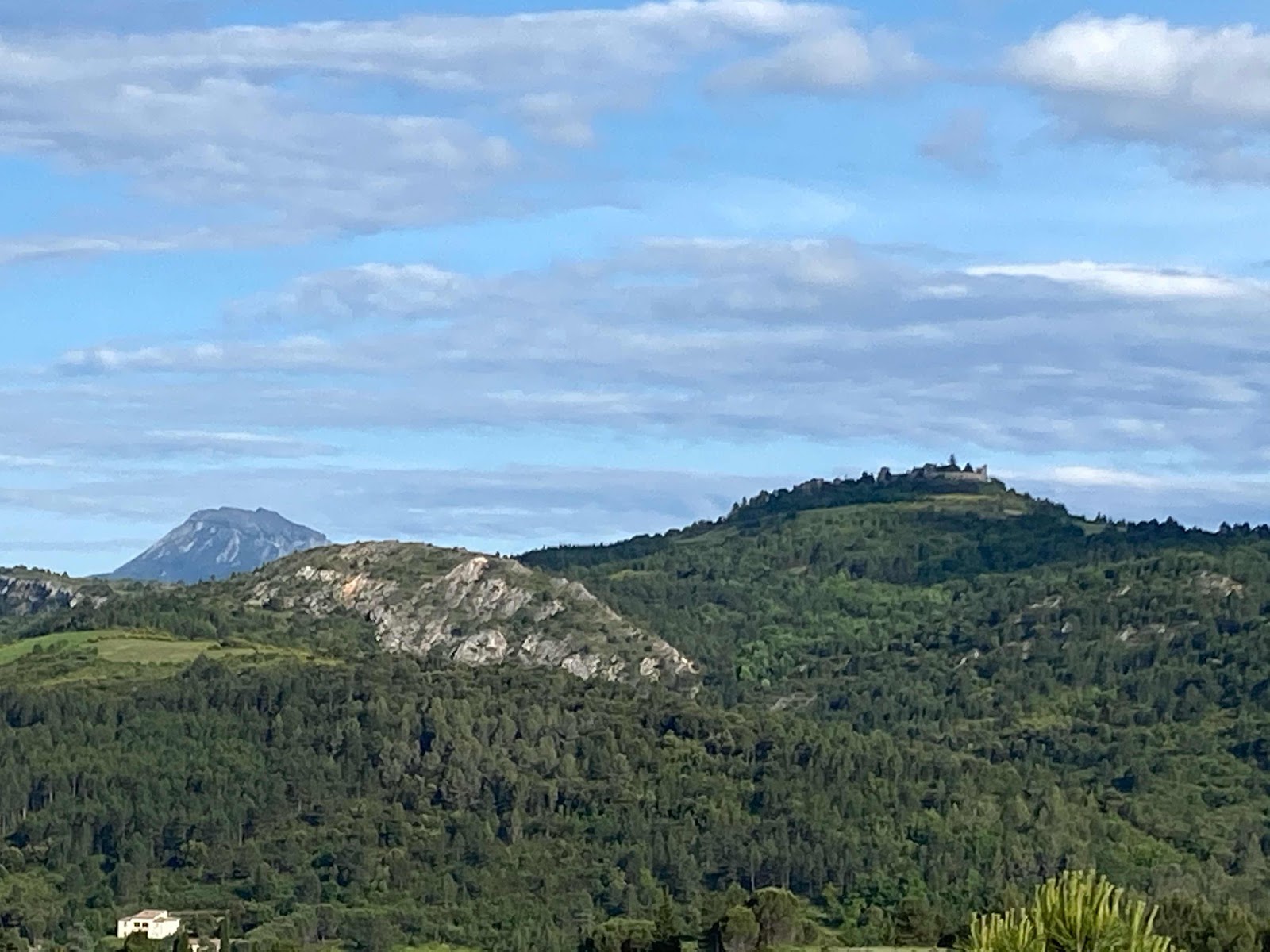 We even came across a scarecrow of sorts that had been erected with the two sights beyond it. Apparently, they both have mysterious followers.

The week has been busy and filled with the joy of friends, along with the satisfaction of beautiful morning runs.

Your photo of the bicycle handle scarecrow with all the green mountains behind is wonderful!