You know that exhilarating feeling that comes with buying something big and new?

I got that feeling in December when I bought a new laptop. It doesn't happen every year or even every other year, but being so reliant on teaching online, I decided I needed a new laptop.

I had been wanting to add some software called ManyCam that allowed me to show slides while I taught. The recommendations were for an i7 processor. My old laptop has an i5 processor, so I upgraded. Ordering a computer from Amazon on December 8. 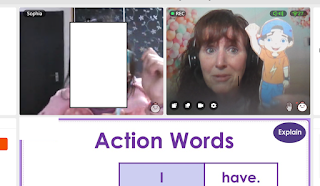 Last week, February 1, conveniently one day after the Amazon warranty expired, the camera began to get fuzzy. I asked fellow teachers what could be causing it. They agreed that it looked like a camera problem, and sure enough, my camera was slowly blurring from the bottom of the picture upwards.

By the next day, I had a student who said the picture was so dark he couldn't see me. I knew the camera was getting worse.

Trying to get help with a technical problem is a ridiculous process. I spent about six hours on the phone calling Dell for help, being cut off, then shifting to another IT person. I watched various tech people moving around the cursor on my screen, checking for drivers and updates, turning on my camera only to see a blurry me looking back at them. After talking to seven people on two separate nights, here's what they told me, call the Dell France division. They'll have you mail your computer to them and they'll fix your camera then mail it back. How many weeks without my computer does that sound like to you?

I teach on my computer six days a week. I just spent a thousand dollars on a new computer in December, and I'm going to have to send it away for an unknown number of weeks only to receive a "repaired" computer back, rather than the new one I thought I was getting in December.

So, this is my attempt to warn you to avoid making the same mistake I did. Do not order a computer through Amazon, Best Tech Deal (which is apparently Best Buy) or Dell Inspiron. They don't care if you get a faulty computer or camera.

A company concerned about good customer service would send another computer, allowing me to return mine after the new one arrives. Then, I wouldn't miss any days using my computer to teach. I'd get a computer with a working camera, the company could fix the camera on my laptop and sell it as a reconditioned laptop.

But a lot of things would change if I ran the world. Sigh!