Is it just us or are travel plans always complicated?
We had planned to go back to the States for Christmas and stay for Grace's wedding in January.
At first, we thought we'd go back to the States in the middle of December. Then, I realized we wouldn't have a full week at Mom and Dad's in Florida, so I suggested we move the date earlier.
Now we're set, flying to Orlando on December 9th and staying with my parents, in the warm Florida weather for a week before heading to Ohio.
I purchased our train tickets more than a month ago and settled down to enjoy November and the first week of December in our French home.
Last week, Annamarie, an older French woman, began warning us of the upcoming strikes. She used the word "méchant" which I had always thought of as "naughty," but it apparently can mean wicked and nasty. The strike could last for a month, she predicted. Trucks that deliver food and fuel won't be able to get through!
"Close your drapes and blinds before you leave for your trip," she cautioned an English friend who was flying to England for a week. "You may not be able to get back for more than a month."
I had seen the notification that there would be a strike on December 5th. Then Toulouse warned of strikes on December 7th and 8th.
Our train to Paris was scheduled for December 8th so we could fly out the next day to Orlando. I got a little nervous, but no one else seemed alarmed.
Earl and I considered trying to fly to Paris if the trains might not run. But the big lines usually run -- the TGV.
Monday night at French lessons, I asked the teacher, who agreed that we might not be able to get to Paris.
"Should we fly?" I asked.
"Maybe the planes won't fly," she said.
"We could rent a car and drive!"
"But the truckers and the farmers often block the highways so you would need to take back roads. Then, you are in Paris. A bigger crowd means even more trouble!" she said, warning us of the black bloc protesters who throw projectiles at cars and cause mayhem at protests.
Plus, she added, you may not be able to get to Carcassonne airport to rent a car. The gilet jaune (yellow vests) will block the roundabout so you can't get through to the airport.
As Earl and I walked home from class, we decided to look for a backup plan after our guests went home for the evening. We had some friends over for apero -- drinks and nibbles.
But during our friends' visit, Earl received a text saying our train on Sunday had been cancelled.
Now we had no hope of a train ride to Paris. If the trains weren't running, would the planes be flying?
I talked to the airline to see if we could move our tickets up before the strikes began on Thursday.
We could. Icelandair was very accommodating, even waiving the $250 change fee, but we would still need to pay $545 for the extra price per ticket. Gulp. That was a bit pricey, plus we'd still need to catch a plane from here to Paris.
I called our credit card company to see if they could help with the extra costs or allow me to cancel the tickets and buy new ones.
The poor young woman with the southern accent sounded distraught for me as she searched and found a warning about disrupted travel in France. In the end, she could only help if the flight is cancelled on Monday.
Finally, I seized on the idea of renting a car on Friday and racing for Paris before the weekend strikes. It's possible that the strikes that begin on Thursday will rollick into the weekend, including Friday, but so far, no one is talking about Friday.
I have to teach until 2 p.m. Then we're getting a ride from our friend Jules up to Carcassonne -- an hour away. I have reserved a rental car and we'll have to figure out a way to bypass the gilet jaune to get to the Carcassonne airport.
Once we have our rental car, we'll drive toward Paris, about a 7-hour drive from Carcassonne. We'll pray for no highway closures and should reach our hotel near the Paris airport before midnight.
We chose to stay near the airport in case the trains or taxis aren't running from downtown Paris when it is time to get our flight.
It might not be the best time we've had in Paris, no runs along the Seine
or meals at the restaurants along Rue Mouffetarde or  Avenue des Ecoles 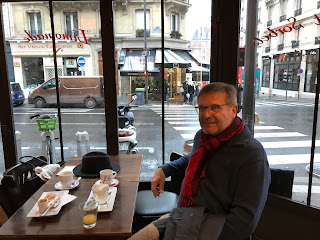 but hopefully we'll be ready and our flight will leave on Monday.
If not -- we'll be foiled again.
at December 03, 2019

Oh my goodness. I can't imagine how stressful that must be. I pray for your journey to be smooth and easy and that you have a wonderful time in the US

Art is what defines a person and his thoughts and inspiration is the most important component of human's soul. Recently, I was inspired by drawing on canvas. The other day I ordered a watercolor world map canvas on Texelprintstore.com for little inspiration... My evenings have become more comfortable and prolific. I hope everyone here will find inspiration for themselves.

Thank you for sharing tis type of information with us. check this website
play bazaar
satta king