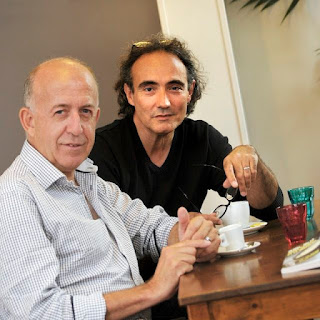 From the beginning, the characters dove right into their plentiful knowledge of wine and the countryside of France. This book takes place in Beaujolais, which is a wine many Americans will recognize. The wine is usually released around Thanksgiving here in the States, so I enjoyed learning about the region and the wine-making process.
Of course, just like any big business, rival companies are out to get each other. Illicit affairs, relatives, jealousies, all contribute to the intrigue within this carefully-written book. 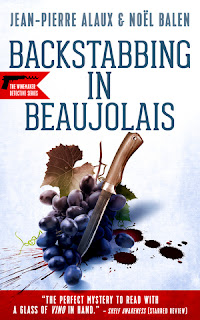 The emotion within the book is fairly sedate. It seems that most of the action happens "off screen" and the main characters learn about it later and react to it. I wondered if that might be a technique used in mysteries, like in Sherlock Holmes.
Since this is a series, it might also be that the characters grow on readers, and they want to see more of Cooker and his assistant as they spread their wine knowledge and solve mysteries throughout the countryside of France.

Jean-Pierre Alaux and Noël Balen, wine lover and music lover respectively, came up with the idea for the Winemaker Detective series while sharing a meal, with a bottle of Château Gaudou 1996, a red wine from Cahors with smooth tannins and a balanced nose.

Anne Trager loves France so much she has lived there for 27 years and just can’t seem to leave. What keeps her there is a uniquely French mix of pleasure seeking and creativity. Well, that and the wine. In 2011, she woke up one morning and said, “I just can’t stand it anymore. There are way too many good books being written in France not reaching a broader audience.” That’s when she founded Le French Book to translate some of those books into English. The company’s motto is “If we love it, we translate it,” and Anne loves crime fiction, mysteries and detective novels.

Global giveaway open internationally: 2 participants will each win a copy of this book. Choice of print or digital format for all Be sure to follow each participant on Twitter/Facebook, for more chances to win

Visit each blogger on the tour: tweeting about the giveaway everyday of the Tour will give you 5 extra entries each time! [just follow the directions on the entry-form]

CLICK ON THE BANNER TO READ OTHER REVIEWS AND EXCERPTS

thanks for your review. Emma at FBT

Wine, a mystery and France, three good elements. The translator has a great idea, translating popular books into English.