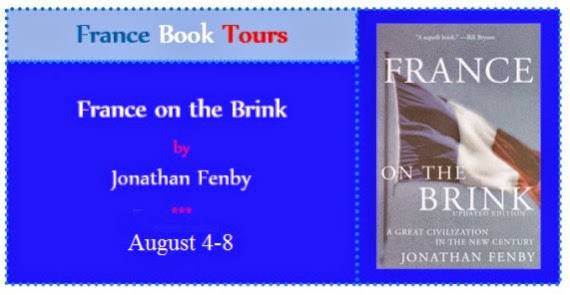 Today, for France Book Tours, my husband Earl is doing a guest blog post. He loves history and he has become a bit of a Francophile thanks to my influence, so this book seemed perfect for him. Here's what he thinks of France on the Brink by Jonathan Fenby.
Author Jonanthan Fenby writes that the problem with the French is “They cling to the past and present, but want a different future.”
After reading Fenby’s On The Brink, it’s clear that even a Frenchman, or anyone intimately acquainted with the Hexagon’s politics and history, would nod in agreement.
“Brink” begins as a political science textbook but it’s soon apparent the author is preparing you to try to understand a “very special place.” 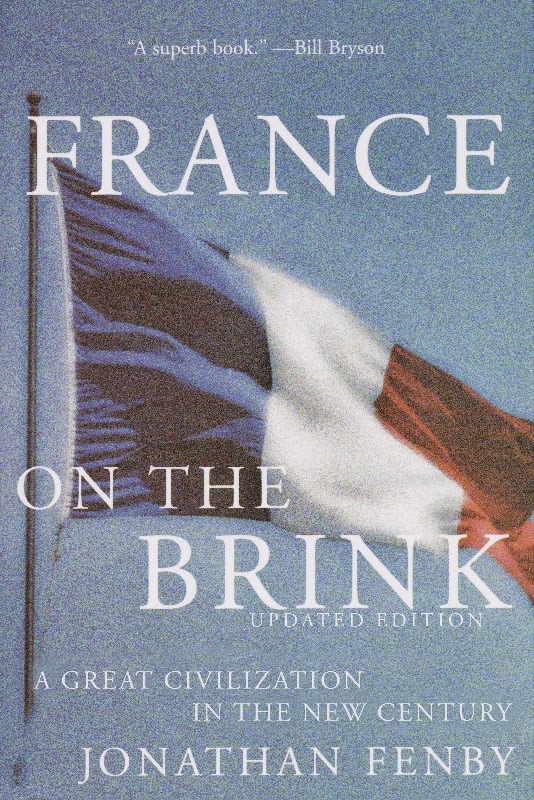 What is clear is that whether Socialist, Communist or conservative, each political flavor proffered a unique solution to rising debt and  unemployment and  the loss of French culture, whatever trait or tradition was under assault, all crumble in the face of routine strikes and a fickle public quick to call for change, any change
The revolving door of governments through the five republics is dizzying to the reader.
Understand that this is a country where the best minds aspire not to medicine or engineering, but to  the Ecole Nationale d’Administration to be a public administrator (not to be confused with ‘public servant’), only to realize that their learning seldom translates into practical and efficient governance.
The betrayal of its Jewish people in World War II and current resentment of immigrants that has fueled the rising success of the ultra-conservative National Front taints the egalitarian banner of the Revolution
However, it’s clear to the reader that Fenby, who has spent most of his life living in and/or writing about France, loves the place. He is the counselor who holds a mirror to the misbehaving country with a black eye because it is worth saving.
Despite politicians who ruled as a job for life, the Great War that decimated the male population, and an inflated opinion of their role on the global stage, the French are a very special people.
Their Paris is the city of museums and leading vacation destination in the world. Their villages, although many practically depopulated, are the lovely remnants of its agricultural past and post card to the world.
But the French need a new vision, Fenby writes. Its leaders must stand up to protests and street action that takes “precedence over legislative action and diverge from the opinion of a 19th-century politician who said, “There go the people. I must follow them, for I am their leader.”
If you love France, you may pity the French or fear for them after reading this book. If you don’t, it will only reinforce your disdain for their haughty view of themselves.
But just remember, France has been on the brink for a long time, kept from tipping over only by the innate strength of the French people.
If only they would learn a new lesson. Such a great country deserves that opportunity.

Synopsis from the publisher
France on the Brink was chosen as a New York Times book of the year and hailed by the Wall Street Journal as “a comprehensive and entertaining diagnosis of what ails French society” when the first edition was published at the turn of the century. Since then, the crisis enveloping France has only worsened, and this second edition, completely revamped to cover the developments of the past fifteen years, offers a fresh assessment of where the nation stands. New chapters chart political developments under Presidents Chirac, Sarkozy, and Hollande; the rise of the hard right National Front; and the unrelenting economic woes that have led to unprecedented levels of disillusion and fragmentation. In this new edition, Fenby offers a loving though candid and unvarnished picture of the nation, contrasting its glorious past with current realities.[provided by the publisher]

About the author:
Jonathan Fenby  reported from France for a variety of newspapers, including the Economist, Christian Science Monitor, Times of London, Guardian, and London Observer. Married to a Frenchwoman, he was, to his surprise, made a Chevalier of the French Order of Merit in 1990. He is also the author of acclaimed biographies of Charles de Gaulle and Chiang Kai-shek, among other works. He lives in England.

If you're in the U.S. or Canada, you can enter to win a print copy of this book.

I totally agree with what that author says just from the relatively short time I have lived in France. I don't know if it will ever change.

I hope I win. I really want to read this book!

thanks so much for your great review. Glad you enjoyed the book. And the extra problem is that it's basically the same people going though these revolving doors, sometimes changing of political sides in between. Just read yesterday that Sarkozy is seriously preparing a come-back. Quite expected after reading the book!

Thanks Earl for your fascinating review.