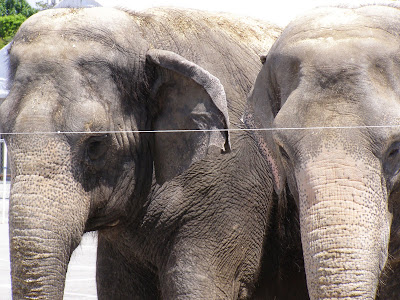 After my tough day with my teenagers (see previous post), I was on the lookout for some magic to repair our relationship. That magic came in the form of an email from the moms' list -- a group of mothers in our small town who send out tips and events, and ask for help when they need it. This email said the elephant walk would be that afternoon.
When the circus comes to town, the train parks in our small town then the elephants and horses walk along the road over the highway to the stadium where they camp during the performance.
Eureka!
My husband and I stopped by the convenience store and bought Yoohoos for the kids. I went to the middle school; he went to the high school to take kids out.
"Will they want to go?" we had wondered beforehand.
Maybe not the youngest, we thought. He is still close enough to the age to worry that it is a little kid thing. The others are past that. . 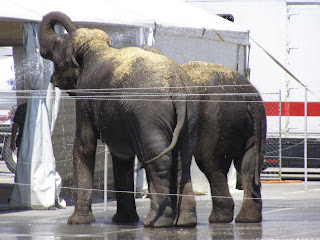 Sure enough, after I took Tucker out of class, he asked where we were going and begged off. "We're watching Remember the Titans in class." Aaah. My education dollars at work. I shrugged. He didn't realize how much we needed family time.
The other kids jumped in the car as if they'd just achieved a jail break.
They popped open their Yoohoos as we drove down to the circus road. We parked and I saw an aquaintance pushing a stroller along the street.
"Will we be able to see the elephants from here?" I called
"They went almost an hour early," she replied. "We missed them too."
Earl, not one to be outsmarted by elephants, drove over to the stadium. We fled the car like circus clowns and milled around the fence, admiring the elephants who were bathing after their hot walk.
"We're the only older kids here," my son pointed out as little heads bonked into his knees.
We watched the elephants and meandered past the cages with the tigers, most of them sleeping. Hmmm. Wonder why they didn't get to walk? 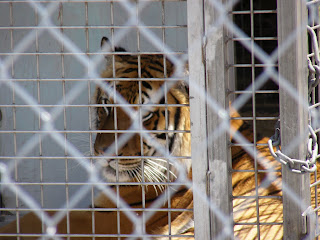 We spotted some miniature ponies and a sleek palamino. The sound of a roar made us jump and then we debated whether it was one of the cats or the elephants. If we lived a little closer, maybe we could the roars and squeals through our windows at night while we sleep, dreaming of life on the African plain.
at May 13, 2009