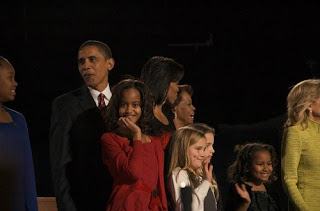 Not until the end, when they were all standing on the platform together, little blonde girls and dark-haired ones; bright-smiled, clean cut white men next to grinning, handsome black men. And there, on that platform, a shot of a middle-aged white woman with her arm around a young black man, squeezing his shoulder as they both beamed at the unending sea of people. That one picture made the tears begin as I realized: It doesn't matter who's white or black or alike or different. We're all one. We're all in this together and we did this. Now, we're starting again.
I know that the world will not be suddenly perfect and I know that I had promised I would never trust a politician again, but I want to trust this man. I want to believe that whatever he does, he is trying to make things better. I fear for him already, the challenges he must face. But he promised his girls a puppy and he has promised us so much more. And I think he'll try.
at November 05, 2008

I so much, just want to, share this
joyous moment with those I care about; very much like I wanted to call everyone I loved when 9/11 happened.

Thank You America for showing me and taking US across this historic
line.

Personally, thank you too, Obama Family, you were the perfect example of an American family and American story to lead the way.

I know you will do your best, we cannot ask for anything more. In
my book, you've already done so much for our nation.

The weeping began for me when, through a half-conscious haze, I heard one of the commentators say, "We're going to have young children in the White House again."

I bolted upright in disbelief. He won? HE WON?!

I have been grinning and weeping intermittently since.

Oprah's t-shirt said it all today...