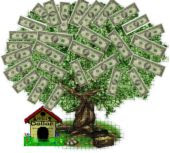 My parents visited this weekend and I am lucky to have avoided a stroke. It's not that my parents and I don't get along usually, but I made the mistake of bringing up the presidential election. Not in front of my dad, who had already commented that the president doesn't have that much power, so Bush couldn't be responsible for this mess. I choked out something about 6-years of a Republican congress before I stifled myself.
But the afternoon my parents were leaving, as we sat at the dining room table without my dad, I approached my mom. She'd made some reasonable remarks recently about no one in Washington to look out for the people. I thought she might be rational on the topic. Instead, she was the farthest thing from it.
When I mentioned Obama's name, she said, "Well, you know he's only where he is because of the Chicago mob."
My husband choked on his chili and a vein started throbbing in his forehead. "The Chicago mob would NOT put a black man in a place of power," he roared. I motioned to him to calm down. We could return this conversation to a sensible one yet.
"Mom," I started, "you know those e-mails you get are always wrong."
"Well, his stepfather raised him as a muslim."
I had nothing on the stepfather.
"And, he said that he'd visited all 57 states and there are 57 states of Islam. I saw that in the paper!"
This was the point where I began to bang my head on the table. No, I didn't, but I wanted to.
"Mom, if you want to vote for McCain then do it for a real reason, not this made up crap."
I wanted to spend some time imagining what my mom thought would happen if Obama was elected. Would he take over the country and force us all to be muslim, was that her fear?
I got up and walked over to the sink. "I guess we can't talk about this, because you don't realize how panicked I am about the idea that we may have three years to leave the country before Spencer turns 18 and is drafted into a needless war."
"FDR started the biggest war ever and he was a democrat."
At that point, I went downstairs to do laundry. Hmmm. Let's compare World War II and the Iraq War. My mom still thought we went there to fight Al Quaeda. She thought the terrorists who blew up the World Trade Center were from Iraq instead of Saudi Arabia.
Deep breaths as I pulled warm laundry from the dryer and carefully folded the towels into squares.
What would be the reason to vote for McCain? The newspaper the next day gave me a good reason. So, Mom, if this is you, under the McCain tax plan, taxes will go down for the top 1 percent in the country by $125,000 per year. I can understand voting for McCain if you want that $125,000 back. I mean, I can understand that people don't want to pay a lot of taxes. And that money the top 1 percent gets back, that's more than we gross a year. But, if you need the money, vote for McCain. Maybe we can borrow that tax return money to buy a new house in France or New Zealand, where my boys will be safe from unnecessary wars.
at September 30, 2008

I'm feeling yah. Same over here except, thank goodness, my mother who I have to see every weekend, decided she was voting for Obama back when he made a speech before the convention (John Kerry's convention).

Actually, my extended family (I think you call them in-laws) have not mended from the Hilliary - Obama contest. Generations drew lines in the sand and resentments still linger on both sides.

This is one to remember - for so many reasons.

Do you think I'm too old to be adopted by a liberal family?