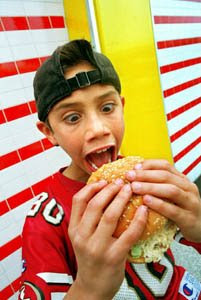 My 12-year-old had been in school exactly three months when he dressed that day in a Polo rugby shirt and gray cords. He tried to smooth down his dark hair that sticks up on top and I saw him swallow hard a few times before he headed out the door.
It was supposed to be an honor, this student of the month award. To him, it seemed more like a punishment. Oh, the award was nice. Good behavior, good grades, respect, helpfulness. All of those things were taken into consideration before they chose my youngest to be the sixth grade boy student of the month. And, he admitted, that he likes to get to school early so he can hold the door open for the teachers and students. Little brown noser. So that may be why he was chosen.
The prize for being student of the month is a lunch at a local restaurant. That sounds good. We'd been there a dozen times in the fall to watch OSU football and eat wings. The catch was, the lunch was for the students of the month from each grade,
5th through 12th. One boy and one girl from each grade, plus the principals from the middle school and high school.
He was nervous. Who would he talk to? He didn't know that many students in the 6th grade, much less students from the high school.
That night he came home with his certificate.
"The burger was so big I couldn't get my mouth around it," he said.
"I was the only one who ordered Coke. Everyone else had Sprite."
We have a no caffeine rule in our house, but I told him for this special occasion he could go with the Coke.
He sat at a table with the two fifth graders and an 8th grade boy who is an acquaintance of his brother.
"It was okay," he said.
The principals sat away from the students, on the other side of a partition, peeking their heads over to see if they were behaving.
The impression that remains, Student of the Month is really just Student of the Lunch. Not a big deal, unless you're the youngest kid in a family whose older siblings haven't been chosen as student of the month-- yet.
at May 09, 2008