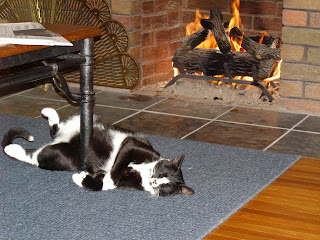 The middle of the day and all I can hear in this near silent house is the jingle of the cat's bell as he bats a rubber ball along the wood floor. Being home alone is strange for me. For 15 years, nearly 16, children have been my constant companions. Sometimes a whole houseful, other times just my three. We'd snuggle on the couch and read books in the winter or set up lemonade stands and backyard sprinklers in the summer. We did messy science projects and some unsuccessful art projects with the glitter still on the dining room table as proof.
Until today.
Today is silent.
A silence that began when my youngest walked out the door following an argument about whether he needed to wear a coat today, his first day of school, with the thermometer reaching a balmy 21. I won the coat battle, but didn't get a goodbye kiss. He left the back door open, so I had to walk over and push it closed as he climbed in the car with his father.
10 years of homeschooling have ended like that. A scared and angry sixth grader slamming out the door, wondering whether he'll have to sing by himself in choir class since he's joining in the middle of the year. His brother and sister are old pros at it now, having started school in August. His sister gave the youngest a light up pen on a string that he hung around his neck. His older brother advised him to remove it. "Looks kind of nerdy."
They were nervous for him. "You have to play football during recess. You have to play whatever the boys are playing," his older brother said.
My youngest shrugged. Today, he is still full of that homeschool fallacy -- that people can choose to do what they like and no one will protest or comment. I'm sure that will fade.
I had a meeting this morning so I jumped in the shower when they pulled away. The bathroom door opened a few minutes later and my husband's glasses fogged up as he stuck his head inside the shower curtain.
"So all the kids are at school."
I wondered how many years he had been waiting for this moment. To me, sending all of the kids to school was a slightly painful milestone. To him, an empty, silent house could mean only one thing.
at January 23, 2008

Did you clean your house before you took that picture ? My photo album is nearly empty after removing all the pictures that showed, you know, the un-tidy-ness I apparently no longer see.

A wise old friend once told me the same thing: In the brain of the married man, an empty silent house can only mean one thing. Also, most other things.