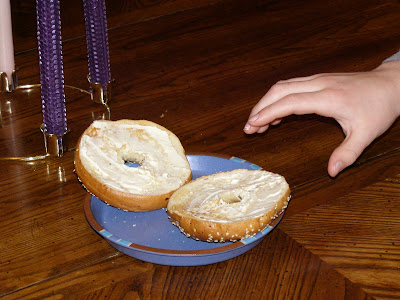 Suppose a mother took a mid-morning break from grading papers during finals week and toasted an everything bagel. She slathered on creamy swiss cheese and the savory smell filled the kitchen. She could almost taste the crunchy bagel as she tapped the spoon against the side of her tea cup and moved toward the table. Then, her 11-year-old, who'd already eaten a whole bagel on his own, asked if he could share hers. She'd look at the still warm bagel, a golden brown around the edges, the cheese melting just slightly.
"Okay," she'd agree to share.
But when the grimy hand reached for the top of the bagel, the one that was covered with sesame seeds and poppy seeds and salty goodness, she had to put her foot down.
"Not that side."
Perhaps, she's not quite the perfect mother after all.
at December 07, 2007

No, no, no, Paulita: that WAS the Perfect Mom thing to do. See, you were protecting Tucker from potential allergic reactions from all those seeds and nuts, and saved him from elevating his b.p. w/ all that salt.

It was very self-sacrificing of you to take that side of the bagel.

love from The Queen of Spin (pamw-h)

So you're saying I should go ahead and take the last brownie too? All in the name of protecting my childen, of course.

very funny -- both of you

No way would I have given up my bagel! He already ate! You need to take care of yourself too!