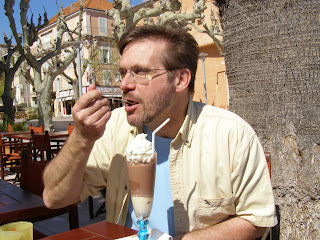 My husband called last night from his vacation, oops, I mean work conference. He was standing at the top of the St. Petersburg Pier and I could hear the wind whistling across his phone. He'd had two beers and was feeling romantic as the balmy breeze buffeted him.
I was immediately expected to match his cuddly mood as I sat at my hallway desk helping to cut and paste the table of contents for my daughter's government report, worth 20 percent of her grade. My back was already aching from sitting in the straight-backed chair for a good part of the day while I graded 25 compositions.
I'm afraid I didn't jump to that romantic, reminiscent mood my husband was hoping for. He was talking about walking along the bay. The smell of the air on those nights when the wind blew just right, rustling the palm fronds. I was barely giving him the "hmmmm" response because I was concentrating on the correct page number for each constitutional cartoon.
My 11-year-old stumbled into the hallway, a tissue stuffed into his red, chapped nose wanting to know if I'd watch Dancing with the Stars. When he saw the already distracted look, he retreated to the television in the basement.
My husband gave up with a sigh. "We should come here sometime, just the two of us," he said. I tried to picture him in the darkening night walking back toward his hotel, the gulls swooping from above and screeching. Then I realized that the evening was getting dark and my middle son wasn't back from the football game yet. My husband had lost my attention again.
"I love you," I managed to call. "Have a good time."
And I wasn't picturing a time when the two of us could escape there together, instead, I was wondering when I might escape to a "conference" and have evenings to drink atop the St. Petersburg Pier and imagine my husband at home, juggling kids and homework.
at October 16, 2007

Oh Paulita...I'm so with you about being at a conference w/o hubby. But then, I don't fly solo so I'm not sure when that would happen.

About 70 Days of Sweat - I don't write romance. I'm pure women's fiction. I don't think the challenge is meant for romance writers only. It's just a great motivational tool. Hope you join us!