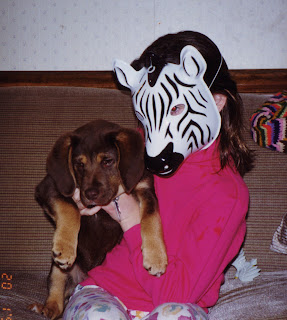 We have lived in this house for six years now and my dog still stands at the wrong side of the door waiting to get out. Like a misbehaving toddler from the 1950s, she stands with her nose in the corner. I have to scooch her back as I open the door at the other side and herd her around to that side, avoiding snowflakes and blasts of cold air that are gaining ground in this bizarre spring.
The dog was a bribe to the kids, brought by Santa the year we moved from Michigan, leaving behind a tight group of friends and godparents. In this friendless city, my husband drove to a farm and picked a chestnut brown puppy with floppy ears. She slept in an oversized dog kennel under the Christmas tree that night with a big red bow around her neck. The next morning she never left my 6-year-old daughter’s arms. My daughter named her Rosie, because she thought that brown fur had a reddish tint to it.
Rosie is eight years old now and mostly my thoughts of her have to do with vacuuming up dog hair and picking up dog doo in the backyard. She barks if anyone has the audacity to walk along the street in front of our house and she remains at the bottom of the pack, even under the paw of the kitten we got last summer.
My daughter Grace was certain she could turn this mutt into a show dog. She set up obstacle courses and ran her through them, along balance beams and through tunnels. Grace tried making her a sled dog, attaching the wagon to her ample sides and having her pull small children through the streets. Grace’s last efforts were teaching the dog to be a jumping dog. Grace would pull molded plastic chairs into the center of the backyard and place a long hockey stick across the seats. With pockets full of treats and a long leash, she would jump the stick, her newly elongated legs flying through the air. Rosie would follow sometimes, her belly barely grazing the stick. Other times she would simply stop, nearly pulling Grace’s arm out of socket as the leash jerked to a stop.
This fall, Rosie started limping. We probably waited a month before we took her to the vet, thinking it might go away. The vet diagnosed an old knee injury that was probably getting arthritis. He gave her a cortisone shot and sent us home. We went back two more times for pain medicine as her limp became worse. In March, the knee was so swollen and she was in obvious pain. This time, the doctor did an x-ray. He called me and my now 15-year-old daughter back to look at the x-ray.
A bone tumor.
Where her femur should have been straight and white, the bones seemed to wander off into their own curling paths.
Grace held it together until we returned to the examining room. She sat down, refusing to look at the dog. Tears streamed down Grace’s face as I petted the dog’s soft fur around her ears and neck.
“She doesn’t know why your sad, Grace,” I said.
My husband and I took her to the Veterinarian Oncologist and our very sensible friends refrained from laughing at us. But after two hours listening to the doctor explain chemotherapy treatments and the cost of amputation, we walked out having decided to make Rosie’s life as comfortable as possible. With all of the treatments, they could predict a 10- to 16-month life expectancy. She had already beaten the odds. A dog with this type of bone tumor normally only lives five months. Rosie had been diagnosed six months previously.
So, now I think about the dog much more. I give her medicine every morning and evening. I let her sleep on the living room rug rather than in her kennel. I feed her treats and trip over her chew bones. I’m careful when I open the door to let her out, trying not to brush her sore leg and leaning way into the spring snow to avoid hitting her with the screen door.
She has been the best bribe I ever gave my children.
at April 07, 2007