I couldn't figure it out. I know that around this age, junior in high school, students start getting a lot of letters from colleges and sometimes from organizations that have camps and forums and strategizing sessions. The students are "specially chosen" and "invited" to attend and they can receive college credit. Of course, with a little further reading, a clever parent will see that most of these invitations come with a $3000 price tag or more.
So I didn't think much when Tucker started getting these invitations. Then came one last week that was obviously hand typed on a typewriter rather than a computer with the return address of a Major General. The Major General had signed the letter with his own blue pen rather than computer- generated signature. 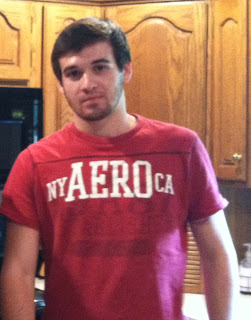 Yesterday came a thick packet with instructions to the mail carrier to return this letter within 5 days if it wasn't delivered. Again, the letter was hand signed.                   Both packets invited, and seemed to be trying to win him Tucker to their side. He had been "nominated" to attend a youth leadership program on National Security.
"I don't get it, Tucker," I told him as I looked through the information. He gets decent grades and did okay on his PSAT his sophomore year, but as he points out, not as good as most of the honors students who took it last year.
"Maybe it's because of my major I marked on my PSAT," he said.
"What?"
When he took the PSAT last year, he had to choose an area of study for college. Since he wasn't sure, he thought Homeland Security would be a good idea.
Well, that explained a lot.
Of course, he's moved on now. He thinks he might like to be an announcer on the radio or television, which is quite a step from homeland security.
"So you're sure you're not interested in going to these forums?" I asked as I bundled up all the information.
"Not at all," he said, his mind full of music instead of terrorism.
He takes the PSAT next week -- the time that counts. I'm not sure what he'll put down for his intended study area, but I guess the competition for broadcast journalism or music majors isn't quite as great as Homeland Security
﻿
at October 10, 2012

Maybe you should tell someone that he's no longer interested ... might stop the background checking and listening in on your phone calls.

Me again's comment cracks me up! Handsome young man you have there - good luck with junior year!

I know, she's so funny. Course, you aren't so bad yourself in the pithy comment department.