I think I'm getting crotchety about books. I find more things in them that bother me than things that I like.
A few weeks ago, I admitted that I'm having problems sticking with a book. I pick one up because I think I'll like it then simply stop reading it. Sometimes I even avoid reading because I don't have a book that enthralls me.
I was determined to stick with Queen Bee of Mimosa Branch by Haywood Smith.
I love the cover, those multi-colored toe nails in front of a fan.
The premise is that Lin, a 50-year-old woman, must return to live at her family home after her husband has an affair with a 20-something stripper and spends them into debt. Her mother is a typical southern matriarch, her father is "the general" who is losing his mental faculties, her adult brother is living at home and going to AA. Her uncle and aunt have moved in after the uncle needed round-the- clock care for his dementia. 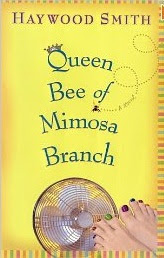 A lot of the situations are funny. Some of them are predictable, like the handsome pharmacist who moved home to straighten out his father's affairs and tempts Lin with his maleness. The book deals with fighting stereotypes, like continuing a friendship with a high school pal who has come out as a lesbian. But some of the stereotypes remain, like the corrupt mayor whose campaign is challenged by the former Harley Davidson-rider, alcoholic who has become a pastor.
Some things I liked about this book, Lin took the time to get to know the real people in her family rather than the roles they had played throughout her life.
Some things that bugged me about this book: Lin was supposed to be a 50 year old but she went to high school in the 60s. The numbers just didn't add up. Perhaps the book was written a decade or two ago and is just now getting published. The author should have updated her numbers.
The handsome pharmacist turned on a dime and became a jerk, totally against character with no explanation. That relationship was never resolved.
If I gave starred book reviews, I'd probably say 3 stars for this book with some good Southern situations.
at October 03, 2012

I've been having trouble sticking with books lately too, for some reason.

Glad you managed to stick with Queen Bee of Mimosa though - haven't read it myself, maybe it's something I'll try once I get my own reading head back x

Sometimes fiction is so similar to real life that I long to get transported. I love reading writers like Ann Tyler who do 'ordinary' so well but occasionally it's fun to go someplace else. Have you read Cloud Atlas? If not, you have plenty of time to read it before the film comes out - I'm taking my time and reading slowly. Just thought it might be an interesting change...AND I love reading your comments and would look forward to your thoughts on the book.