Review -- They Eat Puppies, Don't They?

Christopher Buckley has been hit or miss with his novels of satire about government and society. I loved Thank You For Smoking, but didn't finish No Way to Treat a First Lady. Still, I was willing to give his latest They Eat Puppies Don't They? a try, and I'm glad I did. 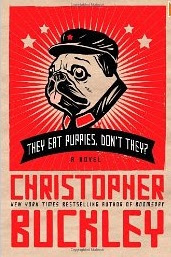 He sucked me in right away with the main character Bird, a lobbyist for a weapons company. Suddenly Bird's job is to drum up hatred toward China so the weapons company can sell a new communication blocking system. When Bird tries to find something connected to China that Americans will be passionate about, all he comes up with is the Dalai Lama and pandas. Luckily for him, the Dalai Lama becomes ill right around that time, and the outrage with China begins to grow
Buckley's characters are not limited to the lobbyist and a militant woman named Angel who makes the news show rounds. He also takes the reader inside the Chinese cabinet as it struggles with a noble president who doesn't want to escalate and war mongering generals who don't fear conflict with the U.S.
The description makes it sound wonky, but Buckley tells the story to make all of look ridiculous as we go about our consumption, ignoring the direction our government is headed.
One exception I'll take with the book is that the end didn't seem to have much use for the main character. He was kind of allowed to drift off. And I'm not sure whatever happened with the weapon system that set off the entire situation.
By the way, for people put off by the title, there's only one brief mention of whether the Chinese eat puppies, so it definitely was not something dealt with in the book.
at October 17, 2012

Sounds like a very different read, Paulita. In fact, more like a political TV comedy than a book x