Well, my book is still chugging along. Probably not keeping J.K. Rowling awake at night worried about the competition, but it is a totally different kind of book. There's not a single mention of a town council in my book.
But there is an Ohio family that travels to southern France to run a bed and breakfast. Some of the chapters are told from the viewpoint of Uncle Martin. He grew up in Kentucky and traveled to Europe to fight in World War II when he was 17. When he got injured, he woke up to find a lovely French woman who would become his wife Lucie. He never moved home to Kentucky again, but he does have a secret from World War II that is catching up with him.
Hope you'll give my book a try.
I have two reviews on Kindle with four out of five stars.
﻿﻿﻿﻿﻿﻿﻿﻿ 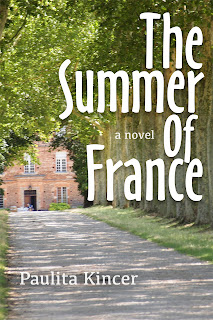 RS says,  "An absorbing story, great characters and writing that sings to you. I couldn't put it down. I only wish I had discovered it on a summer vacation to read at the beach." You can read the whole review here. And sorry, RS, I know it should have been available for the summer since it's called The Summer of France. Why did it come out at the end of September? Okay, one mistake so far.
Another review by HG says, "...if you like realistic dialogue spoken by realistic characters, you will be drawn into the story without realizing it. The pace and tone feel like a "summer in France"; the twists and turns of the plot appear and then recede in a very natural way." You can read that whole review here.
Does this convince you to give my book a try? Only $4.99 to download on Amazon or Barnes and Noble. Or order the paperback version for $14, plus shipping here. It'll be available in paperback at Amazon eventually, but isn't yet.
at October 14, 2012

Email ThisBlogThis!Share to TwitterShare to FacebookShare to Pinterest
Labels: Americans in France, bed and breakfast, novels, Paulita Kincer, The Summer of France, travel in France

Lovely reviews! I'm glad you're writing about your book today. I just finished The Summer of France and have to agree. I liked the breezy style and the main character, Fia, is very well written. She's very relatable - I think most women who have seen their children grow up and away will relate to her - and I was rooting for her the whole way. In my dream cast I would probably look at a Jennifer Garner to play her role. And in fact, I do think it would make a terrific film.
The storyline was fresh and there was plenty of suspense and excitement around every bend - you had me googling like crazy regarding the painting at the center of it all. What a fascinating piece of history! I also loved the setting - the French B&B but the other locales as well. I don't want to spoil the story but I can absolutely see Fia racing around the European countryside on the back of Christophe's moto; I loved going along for the ride.
Alternating the story from Fia's point of view to Uncle Martin's was very effective- his story, his worry about Lucie's response - all of it was compelling. And again, in film terms, it would be so much fun to cast the young and old versions of this wonderful old expat as well as seeing him in the World War II setting. A side note about the way you handled sex. I think you wrote beautifully about it - giving us a peak at their desire for each other without shoving it all in our faces ala 50 Shades. Very, very well done.
Congrats Paulita! I truly enjoyed it.

Sim, I wish I could bottle your kind comments and let them waft out whenever I'm feeling doubtful about my writing. I love the idea of Jennifer Garner as Fia. And I actually had thought of James Garner as the uncle. (No relation to Jennifer as far as I know)

I don't think they're related either. I like him a lot - he's not what I pictured (shorter, cuddlier) but he's a good actor - great in The Notebook of course.