Today, my son turns 19 and is spending his first birthday away from home, away from me. 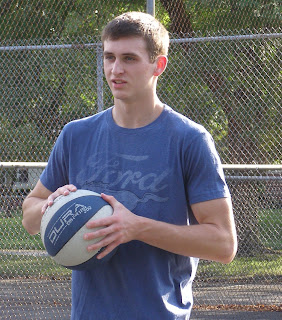 Of course, it's bound to happen unless someone has a summer birthday -- school and jobs will interfere with traveling across the country to visit on birthdays.
This year, Spencer headed off to college in Florida, leaving me here in cold Ohio. I haven't seen him since we dropped him off on August 10. But Earl drove down to Florida to help my parents with a move and he scooped up Spencer for the weekend. Earl sent me a picture of Spencer sitting in a recliner, watching footall and eating nachos. He seems to be doing okay. 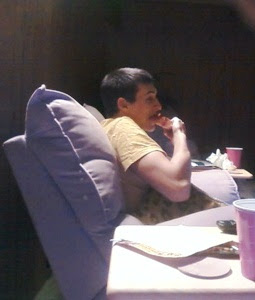 But this birthday away from home made me remember that night, 19 years ago, when I gave birth to Spencer in Michigan. I don't let Earl forget that he talked football with one of the many medical interns crowded into the room while I labored.
After Spencer was born, I called my family and friends. My brother Kevin answered the phone and I told him Spencer arrived at 9:20 p.m. on this Thursday night. 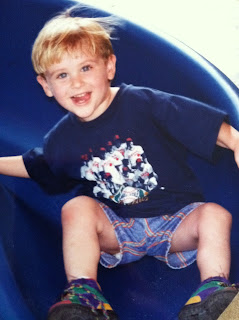 "So you missed Seinfeld then?" he asked.
And that's how I'll always remember what day Spencer was born. The early 90s were prime Seinfeld years, and Spencer later came to love the series as well.
Spencer was born curious and caring, and he still is.
He used to run to our bed every morning, his thick feet pounding across the wooden floor before he dived between us.
Once in our bed, one of his favorite games to play was pressing Earl's nose. Earl would honk or beep.
One morning, Earl was too tired to respond. Spencer gave Earl's nose a few more pushes without any results. He  puzzled over it for a minute.
"Huh, must need new batteries," he said before sliding off the bed and onto his next adventure.
I miss my little guy, and my big guy.

They grow up so fast, don't they?

Robert and I are having our very first Christmas without our sons this year. Half of me is absolutely dreading it and the half is looking forward to it. One thing's for sure, it's going to be strange x

Christmas alone, that would be hard. I guess since your son is in the military he doesn't always have the option to come home, does he? What about the other son?
I'm glad all of mine will be home on Christmas day anyway, but Grace leaves for Vienna at the beginning of January.

My oldest son lives in Macau. He came home for Christmas last year but plans to stay overseas this time round.

The price we pay for bringing up independent children, eh x

What a wonderful birthday tribute. How quickly they grow!

PS -- I just noticed you live in one of my favorite cities! I have dear friends who live in Columbus, as well as Rick's cousin!

Oh boy! They do grow up way too fast and I completely feel and understand your heartache!

happy birthday to your boy!

This is a lovely post, and thanks for sharing the photos. My son has been having birthdays away from home too, since he was 18 when he went away to university. So, it's been a few years now. And just this past month I'd had the same thought as you did, thinking about the day I gave birth to him. So in a way, his birthday is also my big day too.

Their birthday is our Birth Day. Happy Birth Day to you both. My memory of my son's birth is laughing hysterically while watching David Letterman's Stupid Pet tricks…enough so my water broke. I was laughing when I began is trip into this world, and he still makes me laugh constantly. Lovely post, Paulita

happy birthday spencer! he can legally drink in Canada!