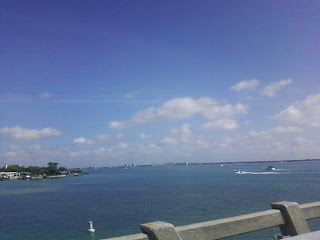 and my boys have a break from school, but I still have to teach. So Earl and Spencer left in the dark of Saturday morning to drive to Florida for a college visit.
The two-day visit started yesterday at noon and was supposed to end with a bonfire on the beach last night, but apparently Spencer met some friends and brought them back to the hotel on the beach where he and Earl are staying.
Spencer's first response to the visit was that there was a lot of talking that he had to listen to. Sitting and listening to people talk is not Spencer's thing. 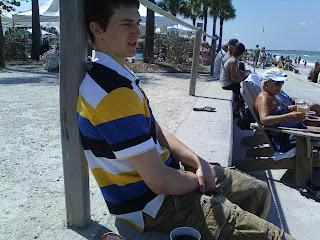 But during a lull in the talking, he did get to grab his basketball from the car and play on a huge court with a high canopy over it to shade it from the sun.
He made friends with a guy from Maryland who is visiting the college too, and that guy with his parents headed out to the beach. The parents sat with Earl in a bar while the guys trolled the night time beach and swam in the pool. I don't know how late they hung out, but this morning Earl said he is trying to get Spencer out of bed after he was partying late with his buddy.
Tucker opted not to go along on the trip because he is running track and he started a lifeguarding class. 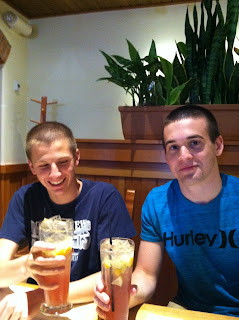 So I took Tucker and his friend Josh out to dinner at Olive Garden yesterday. They ordered some sort of upmarket lemonade and then decided it was a good thing they were secure in their masculinity since the drinks looked very fancy.
The boys have Twitter accounts (I don't even know how that works) and they kept bugging me "to Tebow" in front of the Olive Garden so they could tweet it. ("Tebowing" is that kneeling with your head bent in prayer like the football player Tim Tebow does.) I finally did, knowing they were making fun of me and that I would never see the picture anyway. So be on the lookout for a picture of me "tebowing" in front of an Olive Garden. Of course, when I dropped Josh off at home, his mom came out and said her other son had already showed her the picture of me. I'm sure I'm a legend in our little town now.
at April 02, 2012

Not every mom would oblige. Lucky boys

BTW, love Olive Garden. Can't wait til we go to Pensylvania this June for a baseball tournament. I'm going to the first Olive Garden I see! I will Tebow for you too! Hopefully I remember.

I stalked my little brother's twitter feed to find the picture. Here it is folks, enjoy!

Some loyal daughter you are.

Very funny Paulita....of course I had to check out the photo!.... I'd say you are a pretty cool mom!

you're a good sport. what a goof.

Get the photo from your son and put it on your blog. Why not?