I am buying the lamest thing I've ever purchased from a grocery store, yet I put it in my cart every week now. I blame it on school lunches and my persnickety youngest son.
Spencer, my older son, will eat nearly any fruit or vegetable I put in front of him or pack in his lunch. Tucker, my younger son, will not. The apple might have a bruise. The banana might have a bruise. The clementine is too citrusy; the canteloupe cubes are too soft. I can't win.
For awhile, I bought little fruit cups with mixed fruit in juice. As I was going to the store one day, I asked him if he was eating them.
"Well..." he hedged. "I just think there's a better way to get fruit in me."
I asked for suggestions but he turned down each suggestion. Applesauce? Boxes of raisins?
"How about apple slices?" I asked. I knew he didn't like the whole apple because of his braces.
"Nah, they turn brown by lunch time," he said.
I had tried adding lemon juice to them, but he didn't like the taste then.
At the store, I walked through the produce section, trying to land on a fruit he might eat. That's when I saw them.
For a kid who only wants to eat processed food, this was the answer: 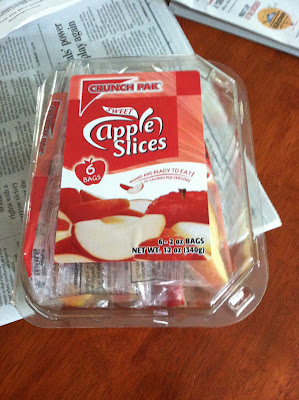 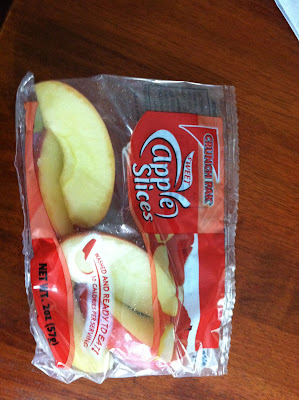 Six packages in a box and they come with little cups of caramel sauce to dip them in.
I know what you're thinking, but don't judge. I've made lots of mothering decisions I never thought I'd make. The sound of that plastic wrap ripping open must be more satisfying than the crunch of a bite into a crisp apple. To each his own.
at April 23, 2012

Whatever works. That's my motto.

I am always tempted but end up buying a bag of apples. I bought an apple slicer. so Marina takes an apple uses the apple slicer and voila, slices! I buy the tub of caramel separate too. Does she take it to school, sometimes if she has time in the morning, she puts it in the tuperware. But yes I'm always tempted to buy those containers of sliced apples. I just wonder what they put on them to keep them from going brown.

Seriously, if we judged each other we'd be all alone. Whatever works my dear.

now you've got me thinking about what my lamest purchase has been. hmm. LOL so many to choose from.

I've been buying these myself. Whenever I buy full apples, I end up forgetting about them and they never last very long. I don't have time to slice a bunch of apples every day. I even bought a large bag of sliced apples from the same company that sells this (probably 20-30 little bags worth) and they all tasted bad, despite being much cheaper.

$4 isn't too much in my mind. And you can buy the kind that have 6 bags with no dip instead of the 5 with dip.