Something to Wake Up For

During spring break, I received a letter from the school that said both boys have two tardies for the quarter. If they get three tardies, they'll have detention.
It was pretty early in the quarter to already have chalked up two tardies.
Mostly, I blame Spencer, who drives the boys to school.
School starts at 8; he rolls out of bed about 7:40, sticks his head under the shower, throws on clothes and grabs breakfast as he walks out the door at 7:54. Luckily, he has a parking spot this year so he doesn't have to search for a spot. But apparently this schedule was not working for the boys this quarter.
I told Spencer he needed to start getting up at 7:15 -- that's about when Tucker gets out of the shower. Tucker likes to take his time in the morning.
"Okay, but if I'm getting up that early, there better be something good for breakfast," Spencer warned. 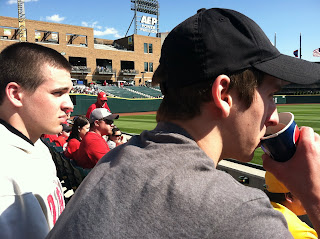 Here are the boys at the Columbus Clippers games on Easter.

Usually, I teach early classes, sometimes leaving before the boys get up. This quarter, for some reason, I'm teaching all afternoons. So for the end of Spencer's senior year, I can make sure there's something for breakfast.
I'm not creating anything too elaborate. It might just be a toasted bagel with cream cheese, or I slice a grapefruit in half and then cut around each individual segment so they'll slide out of the rind. Spencer sprinkles it with sugar and devours it. I might cut up a canteloupe, put some in Spencer's lunch and put a bowl full on the table. I have made French toast and this morning I baked sweet rolls.
One of my friends said it was ridiculous that Spencer expected a reward for doing what he was supposed to do -- getting out of bed and going to school. I'm not sure that breakfast is a reward, and it is kind of nice that I get a chance to spend my mornings sitting at the table with the boys before they leave for school.
Tucker, who usually skips breakfast, has even started to eat if I put something on the table.
I don't think I'm raising my boys to expect a woman to wait on them. I think they're just typical teenagers who are hungry constantly, and sometimes they'll skip a meal or grab something easy but not healthy, rather than fix something for themselves. In less than a month, Spencer will be finished with high school classes, so this seems like a good way to end the school year.
Any breakfast suggestions?
at April 20, 2012

I think its wonderful....these are moments that are special for you as well as for them.... you will miss moments like these when your boys have left home....

I'm a fan of eggs-so easy to fix except for that skillet to clean afterwards.

I disagree with your friend. I love that you have the time to do for your boys. It's what mothers used to do everyday before they had to go to work. You can never have to many family times, or memories.