When Tucker started high school, just two years after his older brother Spencer, I worried. I had a little talk with Spencer about not dating Tucker's friends or ex-girlfriends. I didn't want it to be awkward with the older high school boy swooping down on the younger girls. Well, I didn't think to give the opposite warning, which is why we're now in an difficult girl complication at my house. 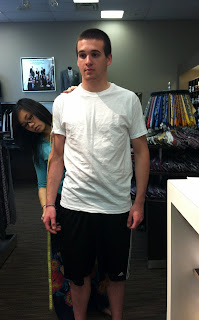 Nearly a month ago, Tucker, who just turned 16, came home and said he was going to the prom with Jordan. Jordan's a senior, 18, and the ex-girlfriend of one of Spencer's best friends. Awkward.
At first, I thought, "No big deal. It's just prom."
Then I started getting the texts, "Be home in a minute. Had to walk Jordan home." Or in response to my "Where are you text?" he might respond, "At the park with Jordan."

Tucker getting fitted for his tux.

Not that long ago, Spencer was reminiscing about his friendship with Jordan and how strange it felt to hardly know her now. She was one of those girls who started dating older boys in high school and she grew away from Spencer and his friends.
When he found out that Tucker was going to the prom with Jordan, he said he didn't blame Tucker for going to prom with her because she's "a hot senior girl."
Then he added, "I don't want Tucker bringing her here to hang out. That would be weird."
Tucker always brings his girlfriends to hang out at our house. We've got a TV and Xbox in the basement. They sit on bean bag chairs or the futon. Earl and I put in lots of loads of laundry trying to keep an eye on them.
I agreed to Spencer's conditions because I didn't want to make him uncomfortable.
Then Spencer and Earl left for a week on Spring Break. Tucker stayed home because of track practice, and he asked if he could have Jordan over. Since Spencer was gone, I said yes. And most nights, Tucker and Jordan hung out at our house for awhile.
When she came in, she'd talk about track practice or prom plans. One night she sat with me a few minutes watching Long Island Medium while Tucker cleaned up in the basement, throwing away chip bags and empty Gatorade bottles.
At first it just felt uncomfortable to have Tucker dating this older girl, but now I hear them laughing together and I feel like Tucker has been good for her. She has seemed really sad and searching whenever I saw her the past couple of years. She seems more comfortable in her own skin. So maybe dating Tucker helps her feel more confident. But I still have the Spencer issue and he did have to return from vacation eventually.
"Mom, can I have Jordan over?" Tucker asked.
"Oooh. Spencer is going to be home by 9:30 so you'd have to walk Jordan home at 9," I said, feeling like I'm in a Cary Grant movie where someone leaves by the back door as someone else is coming in the front door.
"How about 9:15?" Tucker asked. Then he stopped. "Never mind. 9 is good. I can't believe I said 9:15. That would just be so weird."
So far, I've managed for Spencer to avoid running into Jordan at our house. But if the relationship continues, I don't know how I'll continue the juggling.
And next week at prom, they're all bound to run into each other. 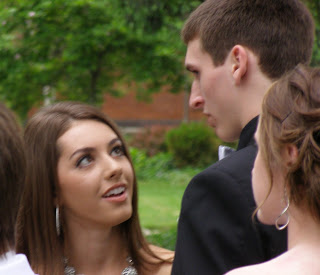 Yesterday, Spencer and two friends were in the kitchen eating pizza when Tucker and I left to order his tux.

Spencer's friend Dillon asked, "Who you going to prom with Tucker?"
Of course, Hayden, Spencer's friend who used to date Jordan, was right there in the kitchen too.
"Jordan," Tucker said. And Dillon swallowed the pink lemonade in a gulp.
"Wow," Dillon said.
"Yeah, he outdid me this year," Spencer said as we walked out the door.
I'm just not cut out for this life sneaking around and trying to keep different factions separated. I thought boys would be less complicated than girls, but maybe it's the other people's daughters who make it so complicated for me.
at April 11, 2012

It's not the boys, it's the girls.
Boys are better and settling things then us women/girls. We end up dragging it on, getting into cat fights etc. You know what I mean? And boys well it's dealt with once and they go back to normal being friends.

Well at least she wasn't Spencer's past girlfriend. :)

I have two sons and there's always been an unwritten rule they don't cross paths in the dating area. If your son's relationship with Jordan continues (and it reads like it might) maybe you could talk to your older son about supporting his younger brother... Maybe there's more to your older sons feelings for this girl? But good luck, Paulita. Young love, eh x