If anyone looked at me closely today (and no one every does) they might have noticed the shadow of a round bruise just above my lip. The small circle might have been mistaken for a smudge of newsprint, or perhaps a small mustache as I age.
But as I stood in front of three classes and in front of both my boys and my husband, no one noted the bruise on my lip or the one slightly higher on my cheek that came from a house cat.
I know, animals can cause injuries. I've had my share of scratches and a few sore shoulders when the dog used to pull on the chain, but the face bruise, well that's a new one.
I walked in the back door after work on Tuesday to an empty house, except for the cats. The cats generally gather near the back door in hopes of getting food or escaping whenever anyone comes in or out.
Tupi, the big, extra-toed cat, was sitting by the back door on top of the oak cabinet that we call a pie safe. It's one of his favorite spots for looking out doors and windows. 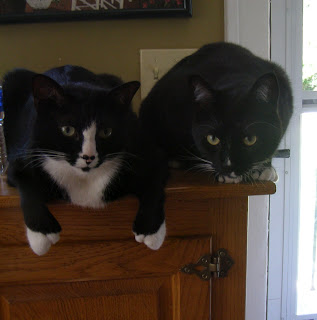 I walked in the door and let the screen slam behind me. This last day of January was a balmy 62 and the cats were feeling fiesty, which is perhaps why Tupi decided to jump onto the kitchen counter across from the pie safe.
So as I stepped into the kitchen, he squatted onto his haunches and launched himself into the air to make the forbidden and risky jump across the kitchen floor.
That's when we collided.
I took a cat head to the right side of my face and he dropped to the tile floor, of course, landing on his feet.
I worried about him for a minute as I put my hand to my face. Did that just happen? Could the cat have a concussion? Did he knock out any teeth?
"That really hurt, Tupi," I said as he scampered off.
I felt a bump swell on my lip immediately.
By morning, the swelling was gone and only a dark bruise remained, plus this slightly bizarre story about being head-butted by a cat, that no one will ever hear, because no one notices the shadow of a bruise on my upper lip.
at February 01, 2012

Darn cats. Mine scratches me if he gets frightened when I'm holding him and has tripped me a few times. I've never been head butted though.

I also got scratches on face too, when a cat jumped over me. Grrrr, I really hate that cat.

We know it was purely accidental. Cats that cute would never do you any harm. (I was hoping for a photo of your lip -- just kidding)

that is the funniest story, I wish you had a video camera set up.

Yah that is scary! My turtle just hisses he can't get out of his tank...thank goodness. I would have liked a photo TBH.

You'll have to use that story in one of your books!

I didn't realize pet cats scratch their friends.But they love to purrr.

A cat bomb! Mine tries to gnaw at my knuckles or to trip me up every now and then but that's about it for his arsenal.