Do you ever stop in the middle of a book?
It's hard to do. Sometimes I've done it because I wasn't enjoying the book. Other times, the book becomes too disturbing.
I read for pleasure and I have a hard time with cruelty or torture. Sometimes if characters make the same dumb choices over and over I put down the book too.
Two weeks ago on First Paragraph Tuesday, I started the book Maine by J. Courtney Sullivan. I enjoyed the book and fretted that all those student papers I had to grade were keeping me from it, but at one point, I had to close it and set it aside. 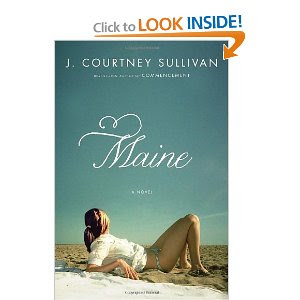 Image from Amazon.com
The book focuses on four female characters from three different generations. The matriarch remembers a night club fire in Boston during World War II that killed hundreds of people, including her sister. So, even though my sister died 30 years ago in a night club fire that killed more than a hundred people, I could keep reading until I came to this section:

Before she could turn the corner, she saw a handful of people inside the club who had managed to break the small windowpanes along Piedmont Street, but had gotten stuck in the windows' metal bars, their heads out, halfway to safety...

Well, I can't type the rest of it.
I put the book aside.
But if I didn't keep reading then that image stayed in my head. I had to go back to the book and let the rest of the words wash away that horrible image.
My own sister wasn't burned in the fire, but died of smoke inhalation, like most of the victims when the exits were chained shut.
I finished the book, and I did enjoy the writing, but when I came to the end, I realized that three of the four characters in the book were not really likeable. They treated people in their family rudely and seemed to make an excuse of the events that had happened to them in the past. What made it worse, I think, was that the characters were mothers who screwed up their own kids because of their past.
When we cleaned up the kitchen the other day, under a pile of papers, my husband found another book that I stopped reading in the middle: Suite Francaise.

Image from Amazon.com.
This book was written by a Jewish woman who later was sent to a concentration camp and died there. The book chronicled the panic of Parisians as the Germans moved in to take over. Again, a series of characters shared their experiences. So what caused me to set this one down, never to pick it up again? A young priest is accompanying young male orphans out of the city and they stone him to death.
I just can't abide thinking that people have that ability to be cruel. I know this author was probably seeing worse things as the Germans moved into France and captured the Jewish people and sent them off to die. But I couldn't continue reading.
How about you? What makes you put down a book?
at February 20, 2012

Either boredom or something that disturbs me will make me stop reading. I don't want to be haunted.

Yes.. room full of books I put down.
Sometimes its actually intentional because I don't want it to end... so I put it down until I find a reliable next one. Other times I really don't know why. And books that become too distiburbing.

Yes, I do put books aside .... but not 'Suite Francais' which I feel was being written to depict that war brings out that people are not what they seem; the innocent not so innocent and trust allowig a person to become gullible, as well as those who become selfless. I could sense the barren futility of it all.

I have no stomach for stories of unkindness or cruelty either. I stopped reading about the holocaust after Ann Frank. I cannot stomach the idea that people cn be that cruel.