I mentioned in an earlier post that money is tight this week, so my cooking habits have to change.
That's when I realized how much money I must be wasting every month, and how much processed food my boys eat. Of course, they prefer the processed food, but that's another story.
Especially on Mondays and Wednesdays, when I work in the mornings and then work again in the evenings, I'm often loathe to cook dinner. I might let the boys fend for themselves with cereal.
Their crazy schedule also adds to the mayhem.
Spencer has basketball practice after school and doesn't get home until around 6.
Tucker has musical practice (he's in the chorus of Oklahoma!) until 5:30 then goes to swim practice at 6:30 til 8:45. He can't eat too close to swim practice because he's gotten sick before.
Truthfully, there's no time during the week when we can all sit down and eat dinner together. It's easier to set out a salad and put something in the slow cooker so everyone can eat on their own time.
This week, the boys quickly ate the granola bars and peanut butter crackers that I had planned to add to their lunches. Then they stood in front of the cabinet complaining there's nothing to eat. Spencer will grab apples and clementine oranges to eat, but fruit doesn't seem to fill that gnawing in their stomaches.
I've increased my cooking and baking. Luckily, even though finances are tight, I have plenty of flour.
I used to bake homemade bread all the time. I felt like even if I fed the family spaghetti with jarred sauce, a homemade loaf of bread made it a real meal. Then the boys got to a point where they wouldn't eat my homemade bread and I started working longer hours. I baked less and less frequently. 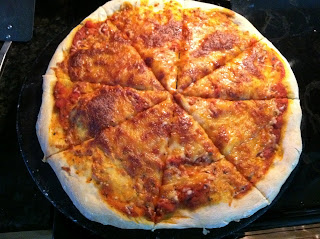 This week, I've made up for it. So far I've baked two loaves of banana bread, chili and French bread, brownies, chocolate peanut butter cookies and a loaf of Italian bread.
Tuesday I rolled out a homemade pizza and Wednesday, before I left for work again, I pulled a quiche from the oven. When I got home from work a little after 9, Tucker was climbing out of the shower after swim practice.
"Did you eat some quiche?" I asked.
"No," he said. "I don't want any."
"I'll warm it up for you," I said.
"Okay," he agreed. Did I mention that laziness, or perhaps pure exhaustion keeps teenage boys from eating homemade food?
In spite of all that baking, the boys still walk in the house and complain that there's nothing to eat. It's a good thing that we don't eat gluten-free, because I have no idea how I would fill my boys up if they didn't eat gluten.
The loaf of Italian Herb bread on Monday was a hit and made my house smell so good that I've included the recipe here.
1 cup + 2 Tbl water
1 tsp lemon juice
2 Tbl oil
3 Tbl sugar
1 1/2 tsp. salt
2 Tbl dry milk
3 1/4 cups bread flour
2 tsp dried Italian seasoning
1 1/2 tsp dry yeast

Now that Beth is back working at Great Harvest Bread store, she can bring home a loaf of bread (or a stack of cookies) after each shift. Our gluten free house is filling up with gluten, but Thomas is the only one to eat any of it. It does help with the grocery budget though!

I always loved your french bread recipe, I used to use that to make baguettes all the time. And your brownies are better than any other glutenous brownie I've ever had.

Last night for dinner I made all the parts for a Chipotle Bowl (I even found the recipe for their rice, and Thomas agreed that it did taste like Chipotle rice) almost everyone loved dinner and there's plenty of leftovers for lunch today.

Yum, I love the smell of fresh baked bread! You really did accomplish a lot in the kitchen for just one week, sounded like a lot of tasty meals. Good for you!

It all sounds really good to me. I remember those days of trying to keep everyone full without it being junk food. My son now has five boys under age 11 and they already eat like crazy. Wait until they all are in their teens-he will need to get a loan to feed them.

Wow you have been baking up a storm! Thanks for sharing the bread recipe!