Maybe it's because I'm always looking at Spencer from below, since he is a foot taller than I am, but his face looks like it's all angles to me. Knobby cheekbones and sharp jawbones. His chin square, like mine and my dad's. 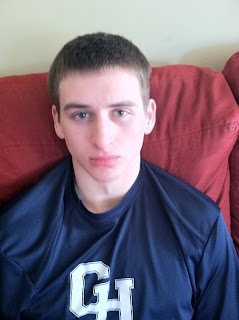 On Saturday, during a basketball game, he went down in a pile of guys scrambling for the ball and managed to wrap his arms around it while signaling time out. The ref blew his whistle and Spencer unfolded to his feet rubbing his cheekbone, which bloomed a bright red. He shook his head a few times, and I worried that he might have hit his head.
"Darn, I should have had that baseline concussion test," I said to my friend Jane.
But after the timeout, Spencer was back in the game.
He told me later that he took a knee to his cheekbone. I took a picture, but it doesn't really capture the skin stretched tight over the bump that formed on his cheek, or the purple that spread under his eye.
His beaten up, angular face was such a contrast to the pictures I looked at last night while searching for shots of him for senior night. As a young boy, he had a round face and giant blue eyes. 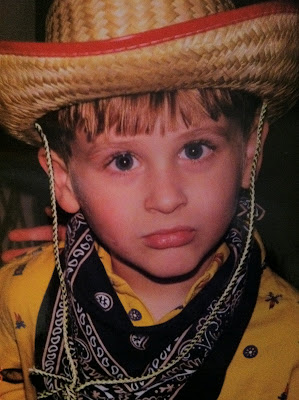 Who knows if that round-faced little boy will make an appearance in his face as he ages into his 20s.
at February 13, 2012

What a darling picture - and the scarf - I mean outfit . smile.

Just found a funny picture of spencer and Adam in the playhouse. Round and blue eyed both. So beautiful they make tears come to your eyes