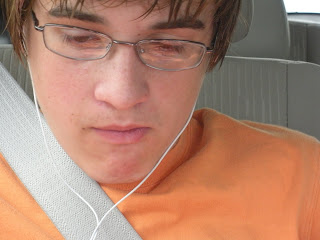 Not a day off for me, but when I finished giving my final exam this morning, I went to the middle school and said (authoritatively), "I need Tucker." The secretary, who is even shorter than I am, scurried to the schedule book and then went to the speaker contraption. "Mr. Page," she said. "Do you have Tucker? He's going to be leaving."
Then I signed my name, pressing especially hard on the pencil, to where it said, "Parent Signature." Under reason, other parents had written "sick," "ill," "orthodontist." I wrote, "Needed at home."
Tucker joined me. We didn't speak and didn't look from side to side as we walked purposefully toward the car. Once inside, we both relaxed a little.
"Panera or UDF?" I asked.
"UDF. Hmmm," he said.
So we drove to United Dairy Farmer and ordered milk shakes, even though it was only 10:30 in the morning. We did some Christmas decorating and Tucker watched the new Star Trek movie with his dad, who is off this week and feeling under the weather.
Earl isn't a big proponent of allowing children to miss school for no reason. I, on the other hand, think most days at school could be better spent. This may be my prejudice because I homeschooled for all of those years, but I don't get why school can't be half as long. Maybe they only need to go in the afternoons. Or maybe they could go in the morning and get out at noon.
When they're participating in sports or play or choir, they aren't allowed to miss any part of the school day, unless they bring a doctor's note. So Spencer and Grace are stuck at school all day, everyday. Spencer wouldn't dream of missing practice and Grace has already missed too many days of school for college visits. She's not staying home without a doctor's note. So I'll enjoy the time I have with the one child who isn't in high school.
He's not sick. He just wanted a day at home to hang out. And I know how he feels. Wouldn't we all?
My husband, and others, warn this will lead to a bad work ethic. What about when he's expected to work every day? Will he just call off for no reason?
Maybe, but then people who were forced to go to school everyday sometimes call off work for no reason too. So I don't think we're causing him irreparable harm. I'll let you know if he's still living in the basement when he's 30 and he asks me to call the boss to say, "Tucker's needed at home today."
at December 09, 2009

I don't think it will hurt his work ethic. Sounds like fun to me.

I never believed in waking kids up and that used to drive Dan crazy. He gave the same argument how will they ever get up for jobs if they don't learn how to wake up early. it's a bunch of hog wash, my kids all ended up being early risers (at least when they need to be) and I never get attitude in the mornings.

Preparing now for a life time of work sounds a little like world war 1 era thinking. I say we all enjoy life! And I say you should bring that boy home from school altogether!

I might next semester. He dreads it so much everyday. Today he's in the geography bee. Only three students from each grade stand up in front of the whole school and answer questions. He was very nervous. He did it last year and came in second. This year he says he doesn't care. Defense mechanism.

What a MOM ! I'm going to be 50 soon and I still call my boss from time to time (although, now I can text her) and say, " wont be in today - need a mental health day ". And then I really enjoy a day off, guilt free with honesty and my favorite pillow and blanket.

You're such a non-conformist.