Chewing My Leg Off to Escape... 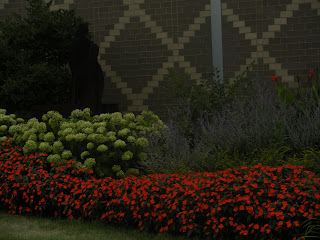 I knew I might be hitting a wall when I woke up several times last night and went over what I should have said, what I should have emailed to the unsupportive dean, to the complaining student, to the full-time faculty member who stood me up for a meeting.
When work begins to infiltrate my sleep, it may be time to bail. I feel like I'm stuck though.
The University where I teach pays by contract. I get one pay check two weeks after the end of the 8-week session. My thought was that this would be a good way to save for college. Big checks that could be squirreled away for college. I'm not sure how much longer I can last.
Thanksgiving interrupted our class and things have been in turmoil. I've caught three students plagiarizing. The one immediately began to revise his ways. The other two, originally from Africa and with a bit of a language barrier, looked at me blankly. Yes, they submitted their essays to turnitin.com and it shows that 89% of the essay was not their work. Was there a problem with that? One went back and put 89% of his essay in quotation marks. Would that work? Not so much.
Then I had the student who sat through class with his arms folded across his chest and refused to join in any group activities. When I asked the students to evaluate their peer reviewers, he ended with the comment: "But what do I know? According to you, NOTHING." So now I'm afraid he's going to bring a gun into class and shoot us all down, especially me.
Last week, after class, about eight students waited for me to complain about the grades they'd gotten on their evaluative essays. Most of them had the same problem they had gone off topic. Rather than evaluating the articles, they ventured into their own lives. One student in particular (OCD) said, "I am very concerned about this class."
Now, I'm thinking, okay the class has jumped the shark. But I asked: "What do you mean exactly? That you're worried about your grade?"
"Well... yes," she said.
Oh, well. That's different. I explained again why she received the B rather than an A. Then yesterday, I had an email from the Dean and from a "Success Counselor" asking about her grades.
The grades are posted online. She can just click on it any time and see that she has 90% in class, which is an A. In this college, an A is an A, whether it's 99% or 90%. What about learning something? Does anyone care about that any more?
Meanwhile, I've spent the past three weeks working on a new training course that takes about five hours of work per week. I still have the final "exam" to take which is scheduled to take two and a half hours. I haven't even had time to think about grading finals for the other college where grades are due Monday.
I set up an appointment at the "University" with a full-time faculty member to 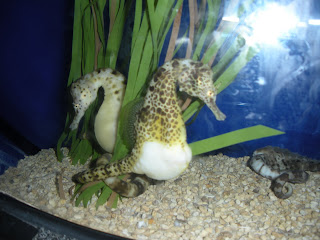 discuss the plagiarism issue. I drove the 15 minutes to campus and she wasn't there. Knock, knock, knock. Nothing. I left a snarky note then found another faculty person to talk to about my frustrations. She told me another adjunct teacher had left, saying he couldn't put in the amount of hours they needed. His time was worth more.
I wonder now if my time is worth more. I know what the "University" is offering and it's my choice to accept it and shut up, or quit. I plan to avoid rash decisions while I am so stressed. I'm going to focus on getting all of my papers graded and giving a little speech in class tonight about the value of what they are learning. Then I may visit the Columbus Zoo and Aquarium because aquariums are supposed to lower the blood pressure, and I may need it.
at December 11, 2009

They don't pay teachers enough! Thanks for losing sleep over trying to mold our future. I appreciate all that you do!

That is a very good choice to avoid making rash decisions when you are so stressed.

You always have the choice about what you do with your time. What is the cost/benefit of that choice? Only you can determine this.

When r you going to the zoo. Maybe I will come with you. SOunds like the best stress relief ever. They are all wrong by the way. You are a great teacher. You should tell them what my history proffesor told me on the first day of class at Hillsdale "Plagiarism will get you an F with no questions asked, not just on the paper but for the class. I will then work to have you removed from the college and make sure taht any school you apply to in the future knows why you were excused from Hillsdale. The only reason to cheat/plagiarize is to avoid work and will be punished more severely than any other academic transgression" Believe it or not NO ONE PLAGIARIZED!

Ruth, Well, it was much harder to catch someone at plagiarism then. Maybe it was even harder to plagiarize because you had to make an effort. Now, with the click of a mouse, you can have someone else write your papers.