One of my favorite pictures of all time was taken at my parents' blueberry farm in Kentucky more than 20 years ago. My nephew Michael, about two years old, was standing on rocks by a creek with a small waterfall. He was leaning over and swatting at the waterfall with a plastic tennis racket. His blue stretchy shorts cover a diaper. His brown hair stands in curls on his head.
The reason I love this picture is because I know the story of what happens next. My soon-to-be husband Earl was playing with Michael. He stood behind him on the rocks.
Minutes after the picture was taken, Michael fell head first into the creek. What Earl and I still remark on was the silence after that fall, until Earl reached in and pulled Michael out. Then the wailing filled the country air.
This week, Michael came home for Christmas. He is in the Navy and he hasn't been home for Christmas in four years. He drinks a lot of beer. He can drink 12 according to him. He has been married and then divorced when his new bride met his submarine and informed him she was moving in with her boyfriend. He has tattoos. He talks a lot and finds something in common with each of his younger cousins who have grown exponentially since he left four years ago.
He played guitar with Tucker and talked to Spencer about cars. He faked shock that Grace could be old enough to graduate high school.
His mother showed me the awards he had won for being indispensable while working on the nuclear sub.
The kids started talking about jobs and Spencer said he didn't want to be a lifeguard any more because the pressure was too much. Spencer saved four kids this summer and just worried that he might miss one.
Michael didn't bat an eye, but said, "I've saved millions." 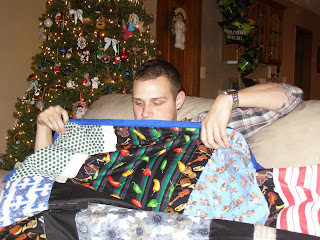 We have no idea where Michael's sub goes and he can't tell us. We only know his whereabouts when he surfaces. So we get pictures from Hawaii where he was sunburned after months underwater, but mostly he hangs out in Seattle waiting for the next time he goes on sub duty again.
I watched him open the quilt my mother had made and wrap it around him. He has changed a lot from that impulsive two year old with the piled up curls. But that boy is still there inside him.
at December 27, 2009

Email ThisBlogThis!Share to TwitterShare to FacebookShare to Pinterest
Labels: growing up, navy, nephews

I think the military can be a lonely life. I was at a naval base once and it reminded me a lot of college with parties and drinking. Glad you were able to see him this year.

The story of where they go and where they are going is so much more interesting than what we already know about them. You made me weepy thinking of our kids growing up and finding their own way in life. At least I will still have a BFF