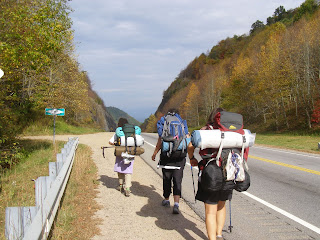 It's funny that as a kid making friends is so important. Being friends with the right people becomes even more important as we edge toward our teen years. Now that I'm an adult, I spend very little effort trying to make new friends. And I'm feeling it now.
I have a few close friends, but I lost most of my daily friends in one fell swoop when we stopped homeschooling more than two years ago. I would see the homeschool moms nearly every weekday when we homeschooled. Now, I rarely see most of them.
Recently, I had an epiphany about friends though. I was leaving the high school where we had been schlepping the boxes full of costumes in the prop room. The mother in charge decided that even though it isn't time to plan costumes for the spring musical, we will organize all the costumes. So we emptied all of the closets and pulled all the crates off the high shelves where they are stacked four deep. Since then we've been methodically separating. We started with hats, which was fun because we tried them on and acted silly. The woman in charge, Jennie, brought along her 7th grade son who was sweet and polite and funny. He tried on hats too.

A gathering of homeschool friends. 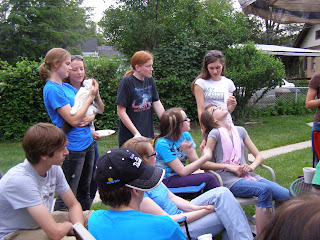 The following week we separated the pants by color and fabric and put them in the proper bins. Then this week, Grace came along and we did skirts. We fill the hall with eight bins full of skirts and separated them according to color. Then we decided we needed to divide them according to skirt length.
We meet each week to work on the prop room and have for quite awhile since the fall play. During the fall play, I was full of complaints. We worked twice a week and I had other things I needed to do!
Then last week was my epiphany. I am making friends with Jennie. This is how it happens. You work together on something, even if you complain about it (which I did, but she didn't). You start sharing stories about your children, your work, your husband, your life. And, before you know it, you have a new friend.
This week, I had a question about Grace's scheduling conflict with swimming and choir. Since Jennie's daughter is in both, I called her and asked what her daughter planned to do. This was another step in the friendship ladder (and ladders have been an important part of our friendship so far since we keep climbing up them in the prop room). Maybe someday we'll reach the point where I can call her just to see how her day is going. Maybe she and her husband will come over to have drinks.
I had two other invitations to meet mothers of high school students for drinks. So Sunday night and Monday night, I spent chatting over drinks.
Suddenly, my dearth of friends is turning into a deluge. And just in time.
at December 17, 2009

Email ThisBlogThis!Share to TwitterShare to FacebookShare to Pinterest
Labels: adult friends, friends, how to make friends

Thnsk for stopping by my blog and leaving a commnent.

It seems that as adults, we are more apt to develop friendships while in the midst of doing something else, or as John Lennon sang, "life is what happens to you while you're busy making other plans."

Who knew that today I would be commenting on the blog of a woman I had met at Balletmet 10 years ago when our daughters just happended to take ballet together?

You just never know when a chance encounter will turn into a lifelong friendship. Pretty cool if you ask me.