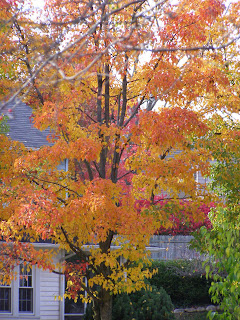 I know this is a strange confession to make, but I love college football. As a matter of fact, when Earl and I began talking about moving to France, one of the first things I wondered was whether I'll be able to watch college football on Saturday afternoons in France. I know! So stupid. Why would a person in France want to sit around and watch American boys hit each other and try to get the football to the end zone.
I grew up with two brothers and a dad who are sports fanatics. Football was always on during the weekends in the fall. When I went to college, first Eastern Kentucky then Wilmington, they both had good football teams and I went to the games on crisp afternoons to cheer on the teams.
Somewhere along the line, it became nearly an obsession. I root for Ohio State now. That's where Earl went and almost everyone in Ohio, including my two brothers, root for OSU. But I watch all the other games as well, calculating how a loss by the number five team could boost OSU's chance and move it up in the polls.
My boys love to watch too and Grace will come into the living room with a book so she can share the junk food snacks we munch. Inevitably, swim meets begin to interfere with college football Saturdays, and I'll find myself standing in an exercise room watching the game while my children swim in the nearby pool.
Then the season draws to a close much too soon and I have to wait another nine months before it comes around again.
Maybe it isn't just college football. Maybe it's the season. The fall is my favorite. The leaves start turning and the sky becomes the clearest blue ever. We walk through crunchy leaves and cook chili. We nestle under throw blankets on the couch and we all sit together rooting for our favorite team. Maybe I'm not obsessed with football but with those sights and sounds.
Even when I'm alone on a Saturday afternoon though, I turn on football, so I don't think I can claim it's merely family togetherness.
The first week of January brings the college football bowl games. After that, I look across the cold months of February and March then the entire spring and summer before football begins again.
at December 22, 2009

Fall is my absolute favorite season too. I love the smell of fall and all the beautiful colors.
I have to say though, I'm loving the snow we've had falling the last several days, too.

So for all you people who think I make comments that are unrelated to the blog posts, you are wrong. To Paulita, regarding the past 4 to 5 posts that I have not had time to comment on -1. you are the best friend a girl ever had, and I really mean that, 2. I would watch college football with you any day of the wek. 3. the christmas picture, any christmas picture is fine. AS for our disagreement about gift cards this morning, differences make the world go round

I feel the same way about college football. I just love it. Here in France, we can see many of the games the next day dubbed in French with time outs and commercials cut out so it truly is just one hour. There is also a channel called ESPN America where we can see some live games-just not all of them. You can see most games on the computer too. Sometimes my husband gets up at 2 AM to watch some game. I haven't yet. Since we lived in Austin, TX we are huge UT fans and try to find their games. Hope we can see the Rose Bowl live.

Linda, You give me hope! I don't hold much hope for Texas against Alabama though. I've been wrong before. I hope you get to watch your game.