So we found out last night that Tucker's swim relay teams will be moving on to State competition, which is awesome, and was also just a few hours after he stubbed his toe on the bathroom door and it swelled up.
Offering the proper amount of sympathy for an injury is one of those mothering things I struggle with, as Grace would be happy to tell you. So when Tucker showed me his swollen little toe, it made me reminisce about the time I broke my little toe.
Of course, I didn't stub it on a bathroom door. That would be so bourgeois.
It was the summer I spent a month in Corsica... 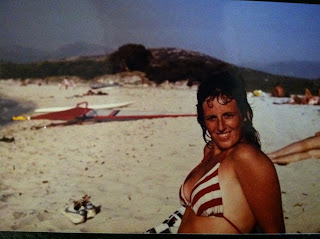 I won't bore you with the details of the handsome doctor Francois, the younger brother of the family I stayed with, but one day Francois, his brother-in-law Yves and I took the family sailboat to a beach that could only be reached by boat. It was a special beach, they explained, but neglected to mention that it was a nude beach. I guess I shouldn't have been surprised -- they were French. 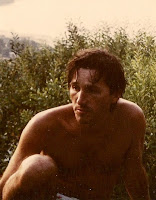 So we sailed for about an hour across the Mediterranean on their little white sailboat. The color of the Mediterranean, was startlingly blue. As we sailed beneath the beaming sun, small fish with gills like wings skimmed above the water for long stretches -- flying fish.
When we got to the special, isolated beach, we pulled the boat onto the sand. Francois and Yves immediately shed their bathing suits while I spread a towel away from them, afraid to even look their way. (I was so American.) It was on that beach that I learned most Frenchmen are not circumcised.
On the way home that evening, sizzling from a day at the beach, Francois suggested I try the trapeze on the sailboat. The trapeze is a wire that attaches to the top of the mast then comes down to a harness that can go around a person's waist. I stepped into the trapeze and moved to the side of the sailboat to act as ballast. (I'm not sure if this was a comment on my American lack of thinness.)
I was timid at first, afraid to lean out over the gleaming water. But Francois and Yves both urged me to trust the wire and lean back with my feet planted on the edge of the sailboat. So I did. 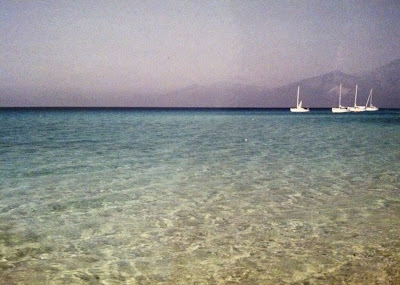 I arched my back and felt the spray of the water cooling me as the wind directed the sails and we glided across the Mediterranean. Then the wind changed or Francois wasn't paying attention and suddenly the boat lurched and I went swinging toward the mast, where I hit my foot and broke my little toe.
Francois was a doctor and he assured me that, although the toe was broken, we couldn't really do anything but wait for it to heal. Luckily, I had a few more weeks to spend barefoot on the beach in Corsica.
How about you? Do you have interesting stories about an injury?
at February 19, 2012

I don't have any interesting injury stories, but I loved yours!

You aren't that bad at being sympathetic. I mean, you aren't perfect, but who is?

I still love you.

When my sister broke her baby toe and it was sticking out at a 90degree angle my friends dad fixed it with a golf pencil. High tech and so 1970s

Heck no. Just bang in occasionally on a door.